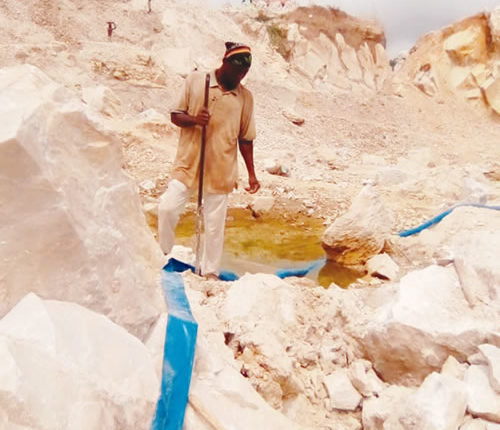 For decades, Dangbala Community in Akoko Edo Local Government Area of Edo State sits on top of gold mines without knowing it. The story of the once peaceful community, however, changed when a solid mineral prospecting company discovered gold in the community. ‘SUYI AYODELE narrates how the invasion by an army of illegal miners has changed the story.

Dangbala Community in Akoko Edo Local Government Area of Edo State, like every other community in the locality, is pastoral, with the dwellers practising subsistence farming for survival. The community, from time immemorial, has been sitting pretty well, literally, on a goldmine. Unknown to them, underneath the earth where they and their progenitors have been faming for decades, lie precious stones and other mineral resources that are capable of turning the fortune of the rustic village around for good. A visit to the rocky and hilly Dangbala community, with the palpable poverty and lack of modern civilisation staring one in the face is a testimony of the huge price a people pay, when there is sheer ignorance.

Safe for the narrow road that takes one to the community, there is nothing else to show in terms of infrastructure. Ironically, on a daily basis, millions of naira is hauled out of the town by the invading army of illegal mineral miners, who, in recent times, have invaded the place like an army of locusts.

The first sign that Dangbala is sitting on wealth showed in 2014, when a solid mineral prospecting company came into the community to prospect for limestone. With the appropriate geophysics survey done and the necessary license and documentation obtained, the company, Macana Nigeria Limited, went to work. For the first two years, 2014 to 2016, the company toiled, almost in vain before it could find traces of limestone. Encouraged by the prospect of the mineral in commercial quantity the company continued to explore for more. By the end of 2019, something bigger than limestone began to surface in the mine and when tested for its components, it was discovered that it was gold. That discovery is the beginning of the problem in the once peaceful community as other miners, illegal and semi-legal, invaded the space.

The Chief Operating Officer, CEO, of Macana Nigeria Limited, Fatai Jimoh, narrating the story of the beginning of the crisis in Dagbala said his company, taking into cognizance, the geology of Akoko Edo, felt that there would be huge deposit of natural mineral in the locality.

“We are into the production of limestone and process material. Our prospecting for minerals in Dangbala dated back to 2014 and from the geology of Akoko Edo we felt that there is going to be a deposit of industrial minerals at a community called Dangbala,”

With no traditional ruler in the community as at that time, Jimoh added that his company approached the Onyike family, owners of the area the company intended to prospect, sought and obtained their consent, and “Onyike kindred agreed that they were going to give us the area for prospecting. A meeting was held at the home of the oldest person and from there we got consent to start our exploration.”

Having secured the consent of the owners of the site, Jimoh said his company “went to the mining cadastral office in Abuja to lodge an application for exploration license. We got exploration License No: 18789, 18790 respectively. In 2016, we started the exploration and considering the huge work, our first two years on exploration was not easy. Between 2014 and 2016 we could not discover anything on the land and at the end of 2016 we discovered limestone deposit in exploration 18790, and in line with mining act we immediately refered to the Mining Cadastral office by submitting an application for a new mineral title  25134, which was granted an approval that same year  for a limestone deposit and we continued with our exploration, we used both scientific and manual method.”

According to him, by the end of 2019, “we got traces of gold deposit on the area and we were happy that having spent a lot of money trying to retain the deposit from 2014 to 2019 but our joy was short-lived because at the beginning of 2020 we noticed high influx of persons into the place where we got the gold deposit, I reported the matter to the Ministry of Mines and Steel Development in Benin in February, some illegal miners were arrested but they could not be detained. The security operative promised that they are going to keep an eye on activities of illegal miners but little did we know that was the beginning of the worst thing to come and the illegal miners continue to increase in large numbers”.

By mid 2020, illegal mining had become an all comers affair with over 1,000 illegal miners operating as different families started giving consents to whoever came for the mineral deposits and was willing to pay. While some of the invading miners managed to secure some level of documentation, many never bothered. Every attempt by security agents to stop the illegal activities remained unsuccessful. “Their illegal activities have overwhelmed us all and they appear stronger than everybody. They graduated from the use of hand and shovel to excavators and washing machine into our exploration license site which is contrary to the stipulated mining act”, Jimoh lamented.

“The illegal miners have graduated from working without papers, while some with papers work in an area where they do not have jurisdiction or license to mine gold or any mineral. They parade deceitful license to hoodwink security men when they are confronted”, he added. The matter was reported to the Ministry of Mines and Steel Development, the Mining Cadastral Office, and other relevant authorities in Abuja over this matter, but the army of invading illegal miners kept increasing in Dangbala and the ministry appeared handicapped in handling the matter. He canvassed that the ministry should be more proactive, not only to protect genuine investors in that segment of the nation’s economy, but to prevent a situation where the illegal mining activities would turn to a major security issue in the area as it is in other paces, where illegal miners visit terror on the people and the environment.

Speaking on the development in the community, one of the leaders in the adjourning town and the Oba elect of Ewan, Chief Daudu Clement, agreed that the discovery of gold is at the root of the tension in Dangbala. Daudu, who was one of the people who brokered the 2014 agreement between the company, Macana Nigeria Limited and the owners of the land, noted that the tune changed when gold surfaced adding “that even firm that had been given consent many years ago and had obtained licenses are being asked to apply for fresh consent”.

What worsened the situation in Dagbala is the fact that the two families, Onyike and Oka kindred, who are the owners of the land are involved in serious chieftaincy title crises such that the various miners, legal and illegal, are accused of supporting one party against the other thus making the scenario muddy. Though Chief Daudu, hinted that the meeting held between community leaders and stakeholders to address key issues was successful and would be beneficial to the two communities and miners in the area, Jimoh said that the consenting authority, the Ministry of Mines and Steel Development “should come out with strong terms and they should free themselves of any possibility of trying to support any miners who don’t have the required licenses. the mining cadastral office should do more than they are doing and set up committees that will go into this area. The security operatives need to learn how to identify fake mining licenses. Every  license has its longitude and latitude. Whoever says he has a license can only work where its longitude and latitude stipulate”.

While the Zonal Mining Officer, (ZMO), Abdulkadiri Adamu, agreed that those carrying illegal mining activities in Dangbala are community youth and the ministry of any wrongdoing or aiding them, he pointed out “that they are some with genuine license over the place. There are about 5 firms with licenses.  A license for limestone is not the same as a license for gold. I have advised anybody interested in mining gold to apply and obtain such license from the ministry in Abuja”.

While Jimoh agreed with the ZMO that some of the miners  were able to get licenses for mining gold, he however faulted the coordinate, “they got it on an area where there is no gold. What   they have is a deceit license to confuse and hoodwink men of Civil Defence or any police they come across while they keep terrorising us on our own existing exploration license”.

“But recently, there seems to be an intervention from an unknown end. As at the beginning of this month there was a stop work order and over 5,000 illegal miners have deserted the area. We just hope they don’t come back again. These miners are robbing the Federal Republic of Nigeria of returns, they don’t pay royalty or annual service fee whatsoever and they keep on mining without any designs or reclamation plan. They have to be stopped if not the essence of getting permit and servicing such permit will be defeated when people without permit are having their way”.

With some arrest made in the past and allegations of official compromise levied against  officials of the  Benin ZMO, it is obvious that the recent truce in Dangbala  might turn out to be a ruse if concrete steps are not taken to check the activities of illegal miners in the area. The recent happening in Zamfara State over illegal gold mining and the upsurge in the nefarious activities of bandits in the state is enough reason for the government to pay attention to Dangbala  on one hand, and the entire Edo North in general so that the Zamfara gory tales will not be enacted in Edo State.

Jimoh suggested that one of the ways to avoid the Zamfara experience is for the traditional setting in the area to come to terms with the fact that “all minerals belong to the Federal Government and they should respect the mining cadastral office and stop giving consent for illegal miners in existing places”.