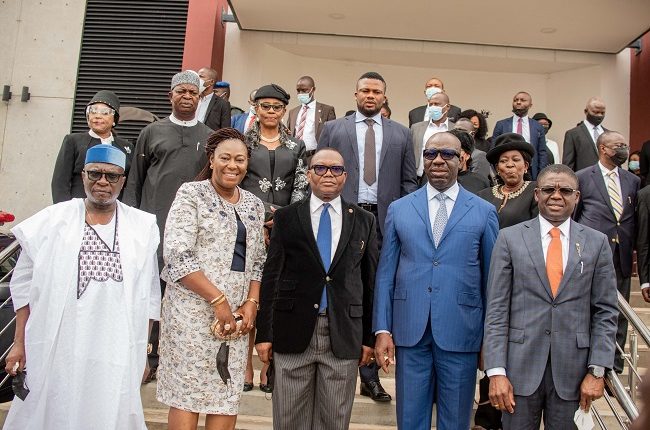 Governor Godwin Obaseki of Edo State on Monday swore in Justice Joe Acha as the Acting Chief Judge of the state, just as the former Chief Judge, Justice Esther Edigin bowed out of service in retirement.

Speaking at the ceremony held at the New Festival Hall in Government House, Benin City, Obaseki admonished the Acting Chief Judge to carry out his duties with justice, honesty and transparency.

He said: “The peaceful, orderly and predictable transfer of power within the leadership of all arms of government, is the single most important hallmark of a civilized working democracy.

“I, therefore, congratulate Your Lordship, on this swearing occasion, as the Acting Chief Judge of Edo, as the most senior judge, pursuant to section 271 subsection (4) of the 1999 constitution of the Federal Republic of Nigeria as amended.

“I urge Your Lordship to always take to heart the solemn oath, which you swore here today, as Your Lordship becomes the custodian of an institution which represents the last vestige of hope in our common existence.

“It is my desire and prayer that the justice sector, under Your Lordship’s stewardship, will continue to wax stronger as an institution and deliver not just judgment but justice to all who come to you or before you.

“The government has, in the past, clearly declared support for the rapid development of the Judiciary as an institution, not just in terms of building infrastructure: We are very keen on changing and transforming all our institutions in Edo.

“That is the legacy this government owes the people for voting massively for us in the last governorship election. Our goal is to help you transform the judiciary system to a very stronger institution.”

He assured that his administration would help build the capacity of other judges and staff in the judiciary system, adding that the government would continue to support him (Justice Acha) with the tools and resources to move the state judiciary system into a technology age.

In his remarks, Justice Acha said he would continue to interface with other arms of government “in our avowed duty of justice delivery to the citizenry for the peace and progress of Edo,”‎ disclosing that within the next few weeks, he would embark on training all the registrars and secretaries to enhance their productivity.

‎In a related development, legal practitioners have described the retired Edo CJ, Justice Edigin, as incorruptible, calm and fearless in the discharge of her duties.

The lawyers spoke at an award ceremony instituted for her by a legal practitioner, Mr Olayiwola Afolabi, who described Edigin as courageous.

Afolabi said he was inspired by Justice Edigin’s frankness and the way and manner she discharged on her duties.

“Integrity is her watchword, she does not attach sentiment while discharging her duty, she is impartial and forthright and I feel compelled by the need to celebrate her by instituting this award, Justice Esther Edigin Award for law students,” he stated.

Another lawyer, Mr Anthony Osula who said the retired CJ does not descend to the arena of conflict in her court, commended her for retiring from the noble profession unblemished.

“To me, her greatest achievement is her calmness and incorruptibility, a very rare virtue of Nigerians of today,” he said.