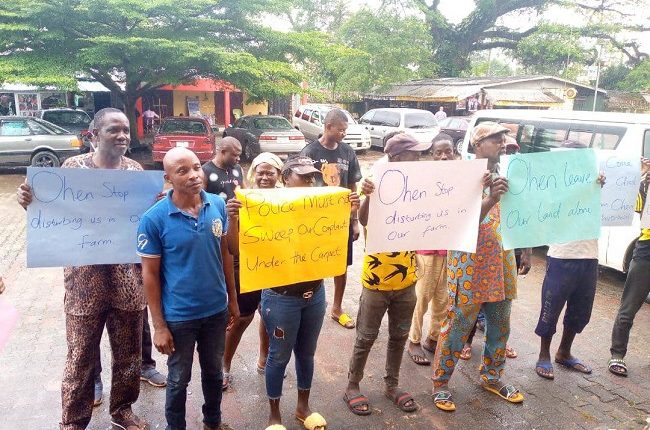 Farmers along the Aruogba/Egbirhe Road by Okhuoromi community in Oredo Local Government Area of Edo State, on Tuesday, protested the destruction of their palm produce farms measuring over 11 acres and their properties including vehicles and farm tools.

The farmers alleged that the Ohen (chief priest) of Okhuoromi, Ovbokhan Igbinovia, ordered the destruction of their farmlands and also threatened them if they should come back to the farmlands.

Leading the farmers in the protest, Faith Alfa, said: “We have been farming here for the past 14 years but in May they came to our farm and destroyed the materials we used in working, destroyed our vehicle and went with the battery of our vehicle, they threatened to beat and kill me if they ever see me in that farm again. We need help from the government and the police.

“I rented a place for farming to grow a palm tree farm. I have more than 11 acres of land,” Alfa lamented.

Corroborating her claim, the Operations Manager of Shalom Jare Ventures, Efosa Aguebor said: “Okhuoromi claim they got a victory in court and went there to chase workers and other people away, they first went to chase the workers away and then the next day, they went to destroy the crops.

In a letter addressed to Governor Godwin Obaseki, the company accused Igbinovia of taking laws into his hands.

Speaking on the allegations, Igbinovia denied the allegations, saying the land in question belongs to Okhuoromi people as rightly judged in the courts and that he was not aware of the destruction of any farm.

“We don’t have any banga (oil palm) farms in Okhuoromi though they have in Aruogba, we don’t have any issue with Aruogba. This matter in question is in court. The company took Okhuoromi to court after we had got a judgment against the people that sold out our land.

The Police spokesman of the AIG Zone 5, Tijani Momoh, also confirmed that there was a petition on the issue before the police authority that was being investigated.