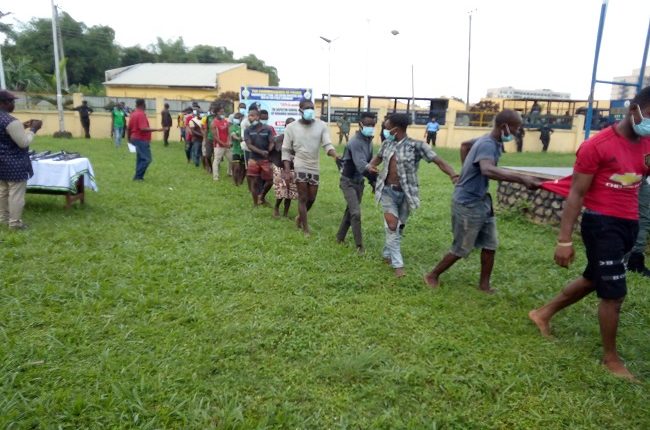 Still reeling from the recent #EndSARS Protest, a total of 126 suspected criminals including 10 runway inmates from the Sapele Road and Oko Correctional Centres, Benin were yesterday paraded by the police in Benin.

The Edo State Commissioner of Police, Mr Johnson Kokumo who spoke with journalists at the police headquarters said that 28 suspects who allegedly broke into the Nigeria Customs Service Warehouse along WAEC Road, Off Benin-Auchi Road, Aduwawa while 45 suspects who looted the Central Medical Stores, Okhoro and 13 looters of Olam Nigeria PLC Private Warehouse, Located at Abico Junction, Upper Sakponba Road, all in Benin City were among those paraded.

He said that two out of the 10 re-arrested escapees from the two correctional centres in Benin Patrick Eguavoen and Abraham Matthew connived with one Eddie Favour who is currently on bail to steal a Lexus car at gunpoint from the owner along the Benin-Auchi road end of the Benin bypass but were arrested at Igueben while attempting to sell the car.

Kokumo said: “The Command is currently pained by the havoc caused by the mobs and hoodlums, masquerading as protesters who were united by common criminality. The stolen arms regrettably will be unleashed on the members of the public.

“However, as the looting and destruction were taking place, the Police and other security agencies mustard their acts together and were able to arrest some of the arsonists, looters and escapees.”

Over 1,200 inmates graduated so far from NOUN nationwide ― Okebukola