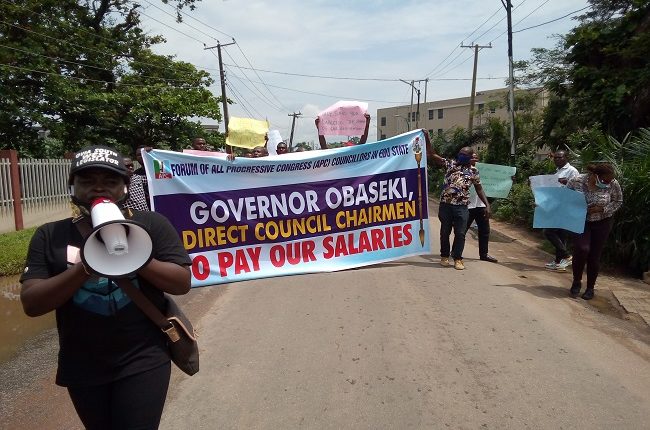 Elected councillors from 16 out of the 18 local government areas of Edo State who were suspended by Governor Godwin Obaseki yesterday took to the main streets of Benin to demand their reinstatement and payment of salaries and allowances.

Armed with different inscriptions, the councillors, all members of the All Progressives Congress (APC) explained that their problems started when Governor Obaseki was screened out of the primary of the APC and decided to make a move to the People’s Democratic Party (PDP).

Their spokesman, Mr Emwinghare Osabuohien said that as a result of the governor’s defection to the PDP, he ordered the 192 councillors to follow him to the PDP but the 90 who refused were immediately suspended from office while the payment of their salaries, allowances, benefits, overhead and other benefits were stopped.

Osabuohien charged: “Against every known norm, we want the world to know that the democratic and constitutional rights of councillors from 16 out of the 18 Local Government Areas that make up Edo state, numbering over 90, have been breached by the Governor Obaseki-led administration.

“It will interest you to know that following our refusal to toe the governor’s line and defect to the PDP as he ordered, we have not received our salaries since May 2020 while some have not even been paid since 2018.

“In addition, all rights, privileges, wages overhead and other entitlements have been withdrawn on the directive of the governor because of our decision to freely exercise our right to democratic choice.”

The spokesman agreed that while the governor’s decision to defect falls within his right as enshrined in the constitution, he, however, added that no law confers on him the right to compel others to follow him.

He said: “The decision by some councillors to remain in our party, the APC is not only democratic but also within their constitutional rights as enshrined in our nation’s statutes. The governor suspended us illegally because we refused to betray the trust and mandate our people gave us by electing us into our various offices. For that, we are no longer able to carry out our responsibilities to the people who elected us.”

Osabuohien argued that the suspension was not only illegal, unlawful, undemocratic
and unconstitutional but also a breach of sections 110 (a) (b) of the 1999 constitution and 22 of the local government law of Edo State 2000 as amended.

The councillor insisted that the indefinite suspension without pay has precluded them from carrying out their legitimate legislative duties, an action which has prevented their respective wards from participating in the activities of their respective House through their elected representatives.

He alleged: “We want the world to know that today, there is neither a functional local government system nor legislative function in Edo state just as there is none at the State House of Assembly where the majority of its members are denied access into the State Assembly complex by thugs loyal to Governor Obaseki led administration.”

The Commissioner of Information and Orientation, Mr Efe Stewart, however, denied the allegation, explaining that the governor is not owing anybody and that the charges are politically motivated.

#EndSARS: Mere change of name will not end Police brutality against citizens ― Reps