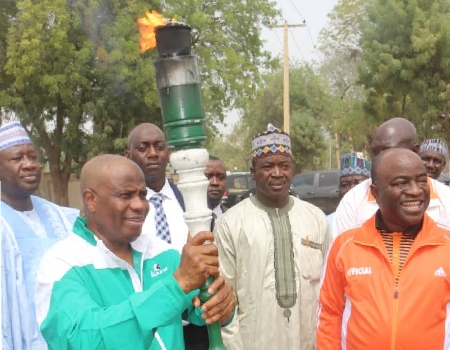 About 250 athletes are expected to attend the national festival.

A delegation from the National Sport Commission led by its Zonal Coordinator Kaduna, Olushola Luke, presented the totem to the state commissioner for youth and sports, Alhaji Aminu Bala Bodinga, who handed it to the governor at Government House, Sokoto.

Muhammad Bello, pecial Adviser Media and Publicity to the governor in a statement, said, receiving the torch, Governor Tambuwal reaffirmed his government’s commitment to ensuring the development of sport in the state.

The Governor pointed out that the sport sector provides avenue for youth development.

He explained that youth who formed the critical mass of the population will continue to be engaged in sporting activities.

Earlier the Zonal Coordinator National Sport commission Kaduna, Olushola Luke, said the torch of unity is aimed at uniting Nigeria so as to ensure the enthroning of peace and development through sport.

He also said the sports fiesta is intended to make the youth alert so that they can defend themselves in case of aggression.