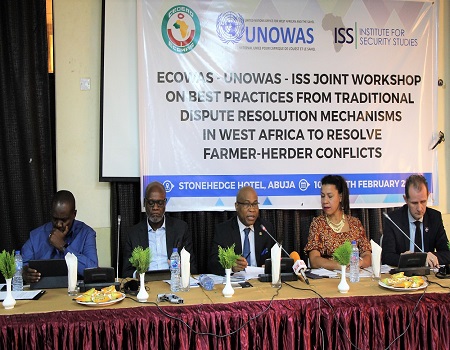 Mr Remi Ajibewa, Director, Political Affairs and Peace and Security for ECOWAS says the sub-regional body is ready to work closely with relevant agencies, stakeholders, and private organisations to end the conflict in West Africa.

Ajibewa said this on Tuesday in Abuja, on the sideline of a two-day workshop organised by ECOWAS-United Nations for West Africa and Sahel (UNOWAS), in collaboration with the Institute for Security Studies (ISS).

He added that the workshop would provide an opportunity for participants to adopt the best international best practice in resolving conflicts.

He added that the workshop would enable partners to share experiences so that participants would be able to adopt international best practice in resolving conflict.

According to him, the gathering was also an opportunity to link local actors in the region to efforts aimed at ending the farmers-herders conflict.

“We are all aware of the challenges in the countries that are facing farmers-herders conflicts and we are ready to partner with agencies and private bodies in finding lasting peace between farmers and herders,’’ he said.

Also speaking, Ms Ngozi Amu, the Chief, Regional and Analysis Unit, UNOWAS said that the workshop was organised with a focus on conflict resolution and the best ways to support governments in the region in their quest to promote peaceful co-existence between farmers and herders.

“We are focused on conflict and resolution. Since 2018 we have been focusing increasingly on the conflict between farmers and herders and we have produced a study on this phenomenon.

“ In 2018 together with the UN family in the region and in collaboration with ECOWAS, UNOWAS, and other partners, we focused on finding a way of supporting governments in the region to promote a peaceful co-existence between farmers and herders.

“ Considering the fact that farmers and herders make up almost 60 per cent of the population in this region, it is very important that we find ways by which these communities will live peacefully together.

“Our main idea is to draw lessons and best practices from local actors in different countries in the region, who are involved in peacebuilding efforts between farmers and herders, and to document these lessons.

“Also, to produce a handbook that can inform policymakers, governments, and ECOWAS as they look to produce policies and regulations on this topic,” she said.

Amu said that although the conflict between farmers and herders was not new, the nature of clashes recorded in recent years had shown that the conflicts had become deadly.

She added that the workshop was part of initiatives implemented with a view to tackling conflict issues.

“We have managed to bring actors from five different countries – Senegal, Republic of Guinea, Mali, Ghana, and Nigeria.

“The idea is to draw lessons from each of these countries,’’ Amu said.