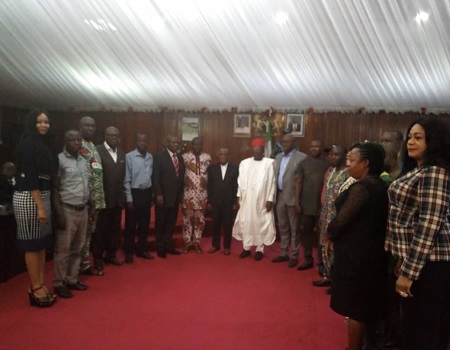 Performing the inauguration at the Executive Council Chambers, Government House, Abakaliki on Wednesday, Governor David Umahi  tasked the committee to concentrate more on the junior workers but ensure that no junior worker earns more than the senior, also urged the committee to  concentrate on how to raise the internally Generated revenue profile of the State to enable the State meet up with the new wage.

Umahi who noted that Ebonyi was probably the first State in the federation to inaugurate such a committee, however, re-emphasised that the State government would definitely review the fees payable, especially in the State-owned tertiary institutions.

He then directed the Vice Chancellor and concerned others to go round and examine the fees paid in other universities to enable the State to take a stand.

Umahi who also observed that Civil servants constitute only a smaller percentage of the State population under his care stressed it is impossible to shut down other sectors for their sake.

He then called on the state workers to take seriously the opportunities created for them by his administration to improve their earnings rather than total dependence on their grossly insufficient salaries.

Umahi said: “We are probably the first in the federation to inaugurate the joint committee on the new national minimum wage.

“As we inaugurate you, you also need to let us know how to improve our revenue.

We would definitely tamper with the fees payable in the State University and other institutions.

“The civil servants are just a small percentage of the people committed into my hands and so you have to bear that in mind.

“If we must join States like Lagos, Rivers to pay the minim wage,  we will definitely import the internal revenue heads obtainable in those States to ensure we pay

“Workers should think more of harnessing the opportunities provided by this administration to uplift their incomes,

“Governors are expected to do magic but I have pushed the magic back to you.”

In an acceptance speech on behalf of other members, the Commissioner for Budget and planning, Prof. Ognonnaya Chukwu pledged their overall commitment to the task.

Describing the issue of the minimum wage in Nigeria as a recurring decimal, Chukwu admonished civil servants to strive to create other subsistence avenues away from monthly salaries.

The joint committee was made up 10 representatives each from the Government side and the Labour side.

The Government representatives were made up of mainly Executive Council members while the labour has representatives are drawn from the Nigeria Labour Congress, the Trade Union Congress, RATTAWU, NUT, NULGE etc.

While congratulating them, Umahi urged the new Judge to discharge his duties with morality and the fear of God.