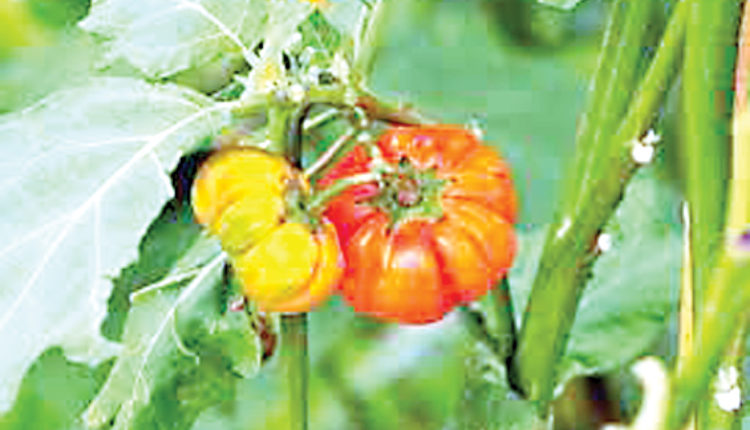 PLANT-based foods have been shown to be beneficial to the brain and may help prevent Alzheimer’s disease and other forms of dementia.

In a new study, experts found that eating green leafy vegetables like African eggplant and black nightshade can do wonders for the brain.

The daily intake of African eggplant and black nightshade-diet is also found to delay cognitive decline later in life.

In this quest, functional foods are becoming prominent. Solanum nigrum, which is commonly called black nightshade or ‘efo odu’ in Yoruba, is usually consumed as cooked and to complement major staple foods like cassava and yam. African eggplant leaf is called garden egg leaf, gboma or ‘efo igbo’ (Yoruba).

The researchers investigated the effects of African eggplant and black nightshade in fruit fly (drosophila melanogaster). The flies were treated with an aluminium-containing substance alone or in combination with the leaves from both samples in their diets for seven days.

Thereafter, a test for learning, memory, reactive oxygen species, antioxidant properties, and enzyme activities was carried out. It was in the 2021 edition of the Journal of Food Biochemistry.

Excessive exposure to aluminium has been associated with several human neurological impairments including Alzheimer’s disease. Alzheimer’s disease ranks as the major risk factor of dementia globally and the prevalence of dementia is put at over 35 million, with a projection of about 66 million and 115 million dementia patients by 2030 and 2050, respectively.

It was found that the leaves in their diets ameliorate the neurotoxicity caused by fed aluminium-containing substances to the flies over the seven-day period. Results showed that impaired behavioural physiology, antioxidant status, and enzyme activities observed in aluminum-treated flies were ameliorated in flies treated with both samples.

The brain is particularly vulnerable to free-radical damage, known to play an important role in cognitive impairment and dementia, especially Alzheimer’s. Antioxidants inactivate damaging free radicals, inhibit inflammation and may reduce the formation of amyloid plaques associated with Alzheimer’s.

Inflammation is strongly associated with cognitive decline. Higher levels of C-reactive protein (CRP) and other markers of inflammation have been linked with an increased risk of dementia, and recent studies show lower inflammation is directly related to healthy brain ageing.

According to the research, the study shows that dietary inclusions of African eggplant and black nightshade could protect against cognitive and neurochemical impairments induced by exposure to aluminium, and hence, these vegetables could be used as a source of functional foods and nutraceuticals for the prevention and management of cognitive impairments associated with diseases such as Alzheimer’s disease.

Previous studies have suggested that maintaining a [healthy] dietary pattern is important for the prevention of onset and delay of cognitive impairment. Such a pattern is not about the restriction of a single food item, but the composition of an overall pattern that advises cutting back on red meat, especially if they are processed, and including lots of plant-based foods (vegetables, fruit, nuts, beans, whole grains) and fish.

Actually, lutein, a pigment found in dark green leafy vegetables, helps to keep the brain sharp with age, and it can potentially stop the neurodegeneration and also improve memory and cognitive function. Lutein is a naturally occurring carotenoid that is found in abundance in green leafy vegetables like spinach.

Importantly, leafy greens like spinach, cabbage and lettuce are some of the easiest foods to work into the eating plan. It can be added to common foods consumed every day without having to build the meals around them, even if one is facing the effects of cognitive decline. It is loaded with folate and vitamins E and K, which play a significant role in slowing down cognitive decline.

‘Why many Nigerians’ mental health will worsen’