Eat a plate of pepper soup, boost your libido 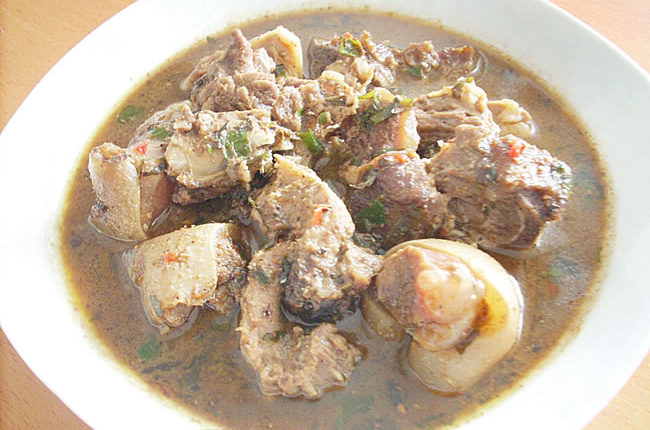 Food and sex have a long, complicated history. For years, people have talked about some foods that work on both psychosomatic and physiological levels. Supported in part by mythological beliefs and in part by actual science, pepper soup garnished with scent leaf, nutmeg and African ginger can help boost sex drive.

In Nigerian society, pepper soup is a local delicacy served in parties and some homes. It is recommended for mothers who have just given birth and for the cold weather because it keeps one warm from the inside.

Researchers show that many condiments of pepper soup such as scent leaf can significantly impact sex drive. Extracts of many spices used to prepare pepper soup have been shown to enhance libido in animal trials, which offers promise for humans, too.

In a new study, researchers said scent leaf reduces the key enzymes relevant to poor libido in penile and testicular tissues of rats. It has a similar effect to sildenafil, a conventional sex-enhancing drug, although with less effectiveness.

For the study, the researchers tested water extracts of scent leaf on penile and testicular tissues of rats under laboratory conditions. It has erection-stimulating properties and so possible reasons for its use in the management of erectile dysfunction.

The 2019 study involved researchers at the Afe Babalola University, Ado-Ekiti, in conjunction with others at the University of Kwazulu-Natal in South Africa. It was published in the BMC Complementary and Alternative Medicine journal.

They declared that scent leaves work by boosting smooth muscle relaxation leading to penile erection. In addition, its chemical constituents are also scavengers for free radicals in the body. Free radicals are involved in the development of several disorders, including erectile dysfunction.

Also, another study revealed that extract of scent leaf significantly increased the sexual behaviours of normal male albino mice in a dose-dependent ratio, without causing an ulcer or adverse effects of conventional sex-enhancing drugs like nasal congestion, headache and visual aberrations.

Moreover, healthy blood flow can do wonders for a man’s libido by increasing blood circulation to the sexual organs. Foods that increase circulation include garlic, chilli peppers, African black pepper and ginger. They contain allicin, which dilates blood vessels and thins the blood.

Some studies show that nutmeg is one spice that has the ability to increase a person’s sexual desire. It awakens the senses and the brain clamours for something pleasurable such as sex.

Researchers in the 2005 edition of the BMC Complement Alternative Medicine said the resultant significant and sustained increase in the sexual activity of male rats, without any conspicuous adverse effects and toxicity, suggests that nutmeg possesses clinically applicable aphrodisiac activity, and also lends support to the claims for its traditional usage as sexual function-enhancing medicine.

Furthermore, another 2008 study of the School of Pharmacy and Technology Management, NMIMS University, in the journal, Ethnopharmacology revealed that the extract is safe and thus provides a scientific rationale for the traditional use of nutmeg in the management of male sexual disorders.

Capsaicin, the spicy chemical that gives hot peppers their eye-watering kick, has been linked with improved vascular health and increased testosterone in men, both of which could indirectly improve sex drive and function.

Also, several studies have linked a variety of African ginger to improved sexual function and desire in men. One of these studies, published in 2010, concluded that ginger might activate a family of enzymes—known collectively as nitric oxide synthase—that support sexual function. Another study from South Africa also linked ginger to increased arousal and sexual stimulation in rats.

So, to keep a high libido, gravitating towards spicy foods to ensure higher levels of testosterone is the way to go.

Psychosocial Disability Awareness Month: Why is it important?