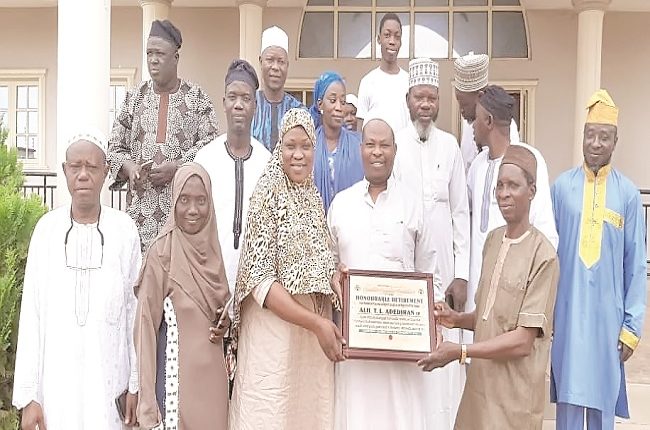 THE Muslim Community of the Emmanuel Alayande College of Education (EACOED), Oyo, has described the immediate past registrar of the institution, Alhaji Teslim Adediran, as a devout Muslim who served the college with honour and distinction.

The chairman, Dr Lateef Adeniran of the college’s Department of History, gave the eulogy at a forum organised to celebrate the former registrar, held at the honoree’s residence in Oyo town.

Dr Adeniran, who is also an Islamic scholar, described Adediran as a man of integrity whose contributions to the development of the college spoke volumes.

According to him, Adediran represented the Muslim community well through his devotion, resourcefulness and dedication to duty.

“The decision of the Muslim community to honour him was informed by the need to appreciate his contributions to the advancement and sustenance of the institution. Alhaji Adediran has bequeathed a legacy to those who are still serving in terms of good leadership and meritorious service,” Adeniran added.

In a remark, the honoree thanked the Muslim community for the gesture and attributed his success to God and the cooperation of the staff members of the college, especially those of the registry.

He wished every serving staff member in the college a successful and progressive career and prayed for them to also end well in their professional journeys.

Politician, Others Offended By My Husband Should Forgive Him ― Adedibu’s Widow
Wife of the late strongman of Oyo State politics Alhaji Lamidi Ariyibi Adedibu, Alhaja Modinat Abosede Adedibu has come out to appeal to those he offended while alive to forgive him, as there is no human being that does not make mistakes. She also added that since he is now late, those who offended him too…EACOED Muslim community  EACOED Muslim community

Kill Me Rather Than Destroy My Cannabis Farm ― Suspect Begs NDLEA In Kogi
A suspected Cannabis Sativa farmer, Clement Akor, has begged the National Drug Law Enforcement Agency (NDLEA) to take his life instead of destroying his 10-hectare cannabis plantation. Akor, a 42 years old father of six children from Enabo village in Ankpa Local Government Area of Kogi State was arrested by the Kogi State command of…EACOED Muslim community

CAMA Is Against Religious Institutions In Nigeria ―CUPP
The Coalition of United Political Parties (CUPP) on Wednesday said that the Companies and Allied Matters Act (CAMA) was being targeted at religious institutions in the country. Addressing newsmen in Abuja, the spokesman of CUPP, Ikenga Imo Ugochinyere said that it was also a plot by the Federal Government to have access to finance…EACOED Muslim community EACOED Muslim community

Hijrah: An event that changed the course of human history