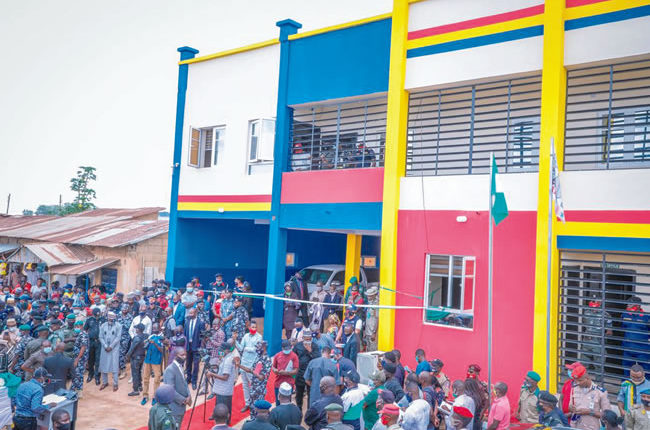 ISAAC SHOBAYO reports that just as Plateau State was heaving a sigh of relief from incessant sectarian crises, new crimes began to rear their ugly heads leading to a new initiative to combat crime in the state.

PLATEAU State, especially Jos North Local Government Area had experienced series of sectarian crises over a long period of time. At a point in time, it was the epicentre of insecurity and had experienced some of the worst forms of violence in the history of northern Nigeria. Episodes of mass killings and destruction of properties had occurred in 2001, 2002 and 2008. It was worrisome and disturbing that some parts of the state capital became no-go areas as they were divided along tribal and religious lines.

However, the reconciliation efforts in the past five years by government and non-governmental organisations seem to have pulled down such walls. Presently, there is free movement within the local government area and there are no restrictions of any sort.

However, while the state was savoring a new wave of peaceful co-existence, another dimension of crime such as kidnapping, drug-related issues, cultism, rape and armed robbery began to surface. The fear being expressed by the residents of the council over the new wave of crime is that if the problem is not nipped in the bud, it may spiral out of hand and return the state to its dark days of crises.

Worried by this development, the state government recently came up with the concept of establishing a modern security post and surveillance centre and tower in Dutse Uku which is one of the hot spots in the local government area to checkmate the activities of the criminal elements bent on truncating the prevailing peace in the once troubled council area.

The construction of the post and surveillance tower has been attracting a barrage of comments from the society. But from all indications, the idea of fighting crime through this initiative is new to the state. While many see it as another step towards consolidation of the peace and security which is anchored on proactivity and a community engagement approach in crime detection and prevention, others have adopted a wait-and-see approach.

The commissioning of the surveillance tower which is to provide an aerial view of the entire area recently was seen by residents as an answered prayer in view of the nightmare they are currently passing through. It is recalled that it was within the area that a lecturer at the University of Jos was killed and his daughter abducted recently. Another young man was also killed as result of a misunderstanding with a lady.

Not only Dutse Uku; other adjoining neighborhoods are also dens of cult groups such as the Sarasuka gang which often unleash a reign of terror on innocent citizens.

The joy of the people therefore knew no bounds when the project was completed and commissioned by the state government recently. Speaking during the commissioning of the surveillance tower and security post, Governor Simon Lalong cleared the air on the misconception on the project.

He said the Security Outpost and Surveillance Tower was designed to detect, prevent and minimise crime within the Dutse Uku, Jos Jarawa and Jos metropolis areas by providing a grassroots-based intelligence gathering system to assist security agencies in responding effectively to distress calls.

He said the centre was equipped with a conference hall; information technology infrastructure with CCTV platform; dome camera with 1.5 kilometre-range that gives day and night visuals of 1500-meter perimeter and a solar-powered inverter that can provide power for about 12 hours a day, adding that it includes armoured personnel carrier and two patrol vehicles equipped with security gadgets which are stationed there permanently for the purpose of rapid response and actionable engagement in crime prevention.

The governor who said the state government intends to replicate the Security Outpost and Surveillance Tower in other areas across the state to firm up its consolidation of peace and security, added that the project should be seen from the wider context of reinvigorating the Operation Rainbow and setting the tone for the implementation of community policing.

“Although the crises of the past that devastated our state have been largely curtailed, we cannot rest on our oars because the merchants of violence are always seeking ways to take us back to the dark days and benefit from the confusion. We cannot allow that to happen which is why we must be ahead of the criminals. In recent times, we have seen the attempts by some criminals to instill fear among the people through kidnappings, robberies, cultism, rape and banditry. With this Security Outpost and Surveillance Tower, we will be able to not only identify them within the communities, but also move against them before they commit crimes,» he said.

“Added to this is the fact that the permanent presence of security personnel and representatives of the community will ensure that the whole area is under surveillance and any threat to peace is quickly detected and analysed with a view to diffusing any tension. We expect that the process of reconciliation, mutual understanding among people of different backgrounds within this area will continue through the use of facilities in this outpost, which will go a long way in engendering lasting peace in the area and the state as a whole.”

However, a senior government official who supervises activities of Operation Rainbow, a state security outfit and the Permanent Secretary, Cabinet and Special Services, Cornelius Shiolbial, told Sunday Tribune that the project was geared at ensuring that there is an early warning system to pre-empt conflicts and nip them in the bud.

“The idea behind this is to have a permanent security presence here that consists of security personnel and representatives of the community who will be working hand in hand to ensure that the whole area is under surveillance and any threat to peace is detected and dealt with on time.

“The structure here provides offices, watch facilities and a conference hall where they can meet and analyse whatever is observed and possibly diffuse any tension. The security team headed by the Operation Rainbow will run shifts and use the watchtower which is well-positioned to observe large parts of the city,” he said.

He added that the state government chose Dutse Uku for the project because most of the problems in Jos North Local Government revolved around the area, adding that it was a general belief that the best way to consolidate on the prevailing peace and to tame the new wave of crime was to keep an eye on the area and to defuse any tension that might arise.

“It was built in partnership with the community and it is the initiative of Operation Rainbow through the governor and the surveillance here will be for twenty-four hours. Also, local security outfits will be carried along; it is also part of the plan towards community policing,” he said.

One of the youth leaders in the local government area, Abdulahi Musa, commended the state government for erecting the post and surveillance tower in the area, adding that the new approach to crime control will go a long way in addressing the situation.

Ahmed Tasiu, a vigilante at Tina Junction area of the city appealed to the state government to replicate the gesture in every nook and cranny of the state, adding that through the security gadgets put in place, the rate of crime in the state would reduce drastically.