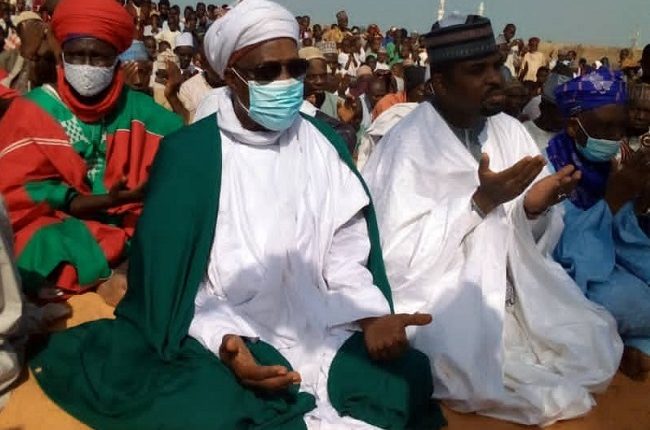 The residents of Dutse municipal in Jigawa State have this morning trooped in their thousands gathered at the city’s Eid prayer ground to observe a special prayer for rainfalls in the state.

The chief Imam of the Dutse central mosque, Dr Abubakar Sani Birninkudu led thousands of people both male and female including children preaching for total submission to God Almighty by all.

The action follows the absence of rainfall in most parts of the state especially in the last two to three months, as a result of which bumper harvest is being threatened.

The Emir of Dutse, Dr Nuhu Muhammad Sanusi, who was physically present at the praying ground, led some high ranking members of the Dutse Emirate Council such as the Galadiman Dutse, Alhaji Basiru Muhammad Sanusi, the Chairman of Dutse Local Government Council, Bala Usman Chamo and other top dignitaries to the two rak’at prayers led by the Chief Imam of the Dutse Central Mosque, Dr Abubakar Sani Birnin Kudu.

In their separate remarks after the prayers, the monarch and the cleric were united in calling on all to go back to mend their ways and go back to Allah in true repentance, noting, this is the only way humans can receive the blessing of Allah, through abundant rainfall and other forms of blessings.

The monarch said, “This is not new, whenever there is a possible threat of drought, we are enjoined by Allah (SWT) through His Prophet Muhammad (S.A.W) that we should go back to Him, and seek for His guidance and forgiveness and this is what we have done today, we seeking for Allah’s mercy and guidance and we hope this prayer will be answered by Allah (SWT) and will grant us not only rain but bless our crops and animals.

“Therefore, we have come to offer this special to Allah to bring us out of the present condition, we pray to Him to give us good rainfall so that we can feed with our animals, our plants to experience good harvests. May Allah also clean our hearts, saying we all need to go back to God because whatever that happens to human beings the solution is to go back to his creator in genuine repentance and supplication.”

The Chief Imam blamed the high level of corruption and other social vices, which have permeated all the fabric of the Nigerian society as the major factor responsible for some of the calamities befalling the human race, adding that, the earlier people mended their ways the better.

His words, “From the religious perspective, whenever you talk about the fear of drought and the failure of rains and coming of famine, Allah SWT has related the conduct of people with the way Allah brings down rain. Allah has called on all people to be pious enough to desist from doing wrong things and repent sincerely to Him by changing their conduct and mending their ways.

“After such a situation, Allah may accept our supplications and save us from drought because really Allah has mentioned in the Qur’an that corruption is all over the world in the conducts of people and this is one of the ways Allah uses to let people understand the situation and come back and mend their ways. So this is what we have said that people should try as possible and change their ways, otherwise, they will continue experiencing this kind of difficulties.”

You said it would affect not only plants but animals would also not get water to drink.

The hope is that Allah will bring down rain for everybody to enjoy in this life, otherwise, if there is a drought or famine, we don’t know what situation the people will enter. Look at the situation we are in now, yet we are not experiencing drought, you can only imagine if we are in a drought season. Prices are at a level that is very high people don’t even what to feed themselves with usually, so if there is drought, the situation will go from bad to worse and this is not what we hope for.

Any fear of famine if the situation continues?

Well, we don’t hope so, there are pockets of areas where the drought is prominent. But most of our territory here has got some reasonable harvest, so there is not really fear for failing of crops insha’Allah, our crops will mature and the people will be over with.

In spite of the huge investment in the water sector by the government and international organisations, water scarcity has grown to become a perennial nightmare for residents of Abeokuta, the Ogun State capital. This report x-rays the lives and experiences of residents in getting clean, potable and affordable water amidst the surge of COVID-19 cases in the state…Dutse residents observe  Dutse residents observe

The Lagos-Ibadan railway was inaugurated recently for a full paid operation by the Nigerian Railway Corporation after about a year of free test-run. Our reporter joined the train to and fro Lagos from Ibadan and tells his experience in this report…Dutse residents observe  Dutse residents observe

Trailer runs over man in Asaba