Duke, others welcome defectors back to PDP in Calabar 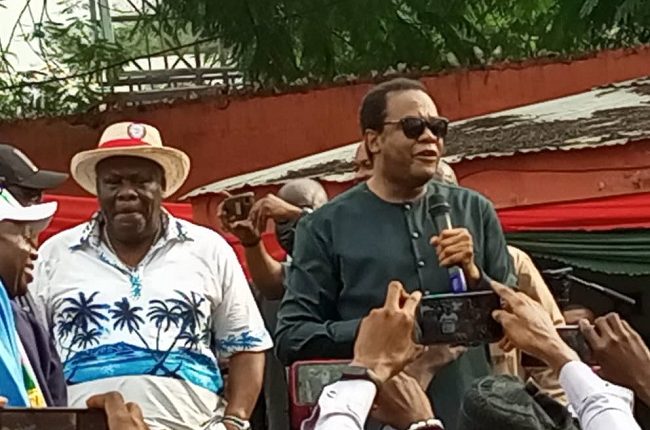 Former governor of Cross River State, Donald Duke, along with other top members of the Peoples Democratic Party (PDP), in Cross River, has welcomed some defectors, including Hon. Ekpo Okon, Hon. Wilson Ekpeyong, Hon. Paul Ogar, Ntufam Asu E. And two others back into the PDP from the All Progressive Congress (APC).

Addressing party supporters at the PDP state Secretariat Calabar, Duke welcomed them back to the party and said the reception of defectors from other parties was going to be in batches. He assured that soon more defectors would be welcomed into the PDP.

“we cannot afford to give our best brains to other people, they should come back, let us tidy the house.  If all those who want to return to the PDP were received today, this podium won’t contain us.  So we decide to to it in batches'” he said.

Speaking at the event Ekpo Okon thanked God for his return to the party and affirmed that it was a return to his home.

“Let me thank the Almighty God for this day, and those who have kept the umbrella standing. My return to the PDP is a trip back home.

“Your  Excellency, Dr. Donald Duke, the state PDP chairman  Ikem, Senator Jarigbe Agom, Hon. Dan Asuquo, the very special Dansuki and so many others, I could not resist your calls.

“Even many others who are not here, I know how many times I got calls from them.

The former commissioner said he responded to the call of returning to the PDP because he knew the calls to return was to bring back their collective efforts to salvage Cross River State.

He regretted that the state is as bad as the state library.

Earlier at the event, the PDP State Chairman, Venatius Ikem, assured that between now and March next year, there would be massive defections back to the PDP.

“you know this is harvest season, so, soon we will be harvesting so much. And like I said somewhere else, we are just flagging off the harvest because I know the lineup that is waiting to be received into our great party PDP.

“Yesterday, I got here from Obanliku, the line up was much, so from now till April May and June, we will Harvest so much. I know that God sent me to lead this team and recover Cross River State,” he said.

Ayade harps on retraining of teachers for quality education