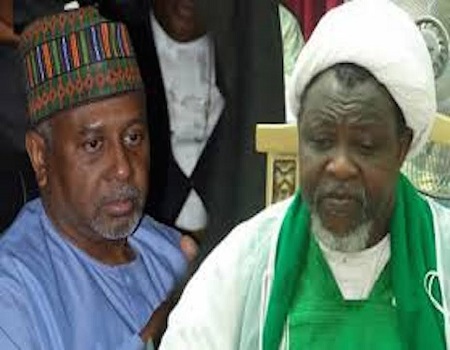 The Department of State Services, DSS, on Friday dismissed the alleged illegal detention of some notable Nigerians undergoing trials at the Courts and the claim of disobedience to Court Orders by the Service in some quarters.

In a statement made available to newsmen in Abuja by its Spokesperson, Dr. Peter Afunanya, the Service specifically explained the circumstances that warranted the continued custody of Col. Sambo Dasuki (rtd.) and Sheik Ibrahim El-Zakzaky in its facility, saying that it was at the request of the duo.

The statement reads, “there has been an outcry about the alleged illegal detention of some notable persons undergoing trials at the Courts and disobedience to Court Orders by the Service.

“To put the records straight, the Service wishes to advert public attention to the circumstances that warranted the custody of Col. Sambo Dasuki (rtd.) and Sheik Ibrahim El-Zakzaky in its facility.

” For the avoidance of doubt, the duo had appealed to the Courts to be left in the custody of the Service instead of being taken to the Correctional Centres.

“Well-meaning Nigerians are equally witnesses to the case of Omoleye Sowore, who, on a similar order of the Court, was to be remanded at the Kuje or Suleja Centre but preferred to be kept at the DSS.

‘Everyone, also, saw what eventually played out with El-Zakzaky, when he opted to be returned to the custody of the Service even as the Court had granted him leave to seek medical care in India. These were choices these personalities made on their own volition.

“Since their stay, the Service has continued to extend the best courtesies to them.
They are allowed access to people and use of other facilities like telephones, gymnasium, TV, newspapers and medical facilities.

“Among others, their families and trusted persons bring them food of their choices on a daily basis. There could not have been better treatments than these.

“Against the wrong perception that the Service held these persons in defiance to Court Orders, it is obvious, by the above explanations, that they rather chose to be looked after by the DSS.

“The reason for such a choice is not farfetched. It is simply because the Service’s holding facilities are good and within acceptable international standards.

“It is not in the character of the DSS to join issues with persons or groups. Yet, silence should not be golden at a time like this. For its compliance with democratic norms, the Service owes the Nigerian public a duty to explain some of its activities. This is more so that these are oftentimes grossly misunderstood or misrepresented.

“Once again, the Service restates its commitment to a strong partnership with the media and other stakeholders including opinion leaders. It is not averse to criticisms and therefore welcomes constructive engagement from all and sundry.

“It will continue to conduct its operations within the bounds of the law and importantly be guided by that time tested axiom of Usman Dan Fodio that conscience is an open wound and only the truth can heal it.”

#KogiDecides2019: Bello commends INEC as he casts his vote