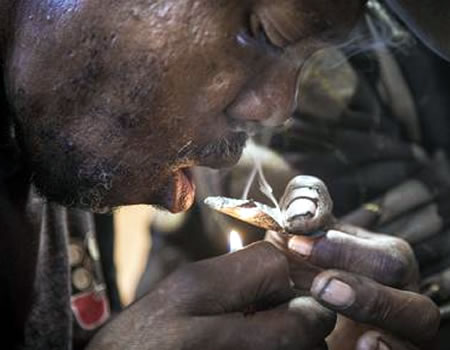 Some drug addicts in Kaduna metropolis have attributed the high rate of drug abuse among youths in the state to unemployment and poor parenting.

Some of the addicts said in a separate interview with the News Agency of Nigerian (NAN) in Kaduna on Thursday that they indulged in the act due to idleness.

One of them, Mr Musa Sani, 26, a university graduate, said he took to drugs after idling away at home for many years after graduating from the university without a job.

Sani, a graduate of Business Administration from a Malaysian University, said that after sourcing for capital to start a business without success, he began taking drugs to ease the pain.

“I graduated in 2016 and am still jobless. Lack of opportunities and capital to start a small business exposed me to bad peer groups who introduced me to drugs.

“And you know once you start, it’s very difficult to stop. I won’t be in this mess if only I found something doing,” he said.

Another addict, Mr Adams Bitrus, 27, said he began abusing drugs at the age of 16 due to poor parenting.

“I wanted to be a soldier, but my father, a wealthy pastor insisted I must go to Bible school to read Theology and become a pastor.

“After many pleas to allow me to follow my dreams without success, I ran away to Abuja to stay with my elder brother and ended up doing drugs.

“I am taking Indian helm, although I want to stop, the ecstasy is too satisfying and stronger than me that it will take serious help to get me out.

“It would have been a different story if my father had listened to me and allow me to chose my carrier,” Bitrus said.

For Mr Rabiu Lawal, 35, the reason was neither unemployment nor poor parenting, but peer group pressure and the ecstasy derived from taking drugs.

“I take Indian helm, but when I can’t access it, codeine will take me to a mental state that makes everything appear easy and possible; where everything is sweet and no worries,” he said.

Mr Murtala Zango, a mechanic, who began abusing drugs at 14 years, appealed to parents, friends and families to show love to victims of drug abuse to encourage them to find a way out.

“Most of us are trying to quit. We are fighting the addiction with little or no success, but with a little help; a little show of love; a little concern, we will figure a way out so we could be normal again,” Zango said.

Meanwhile, Malam Hamza Sabo, a parent, acknowledged that lack of good parenting contributes to the high rate of drug abuse among the youths.

According to him, the negligence of parents in monitoring their children at home or while at school exposed the children to bad friends who introduce them to drugs.

“Parents must learn to make their children their best friends so they can share their experience, fears and expectations in life which will serve as a window for parents to advise them on the best way forward,” he said.

Sabo equally agreed that government inability to create jobs for the teeming idle youths in the state also contributes to the menace of drug abuse among the youths.

He said that the government need to do more on job creation for our youths to be gainfully employed and do something with their lives that will have a positive impact on their lives and their communities.

For Malam Yusha’u Abdullahi, apart from creating jobs, the government must intensify its effort on creating the needed awareness on the negative effects of drug abuse.

Unemployment: CIPM to collaborate with institutions towards closing skills gap