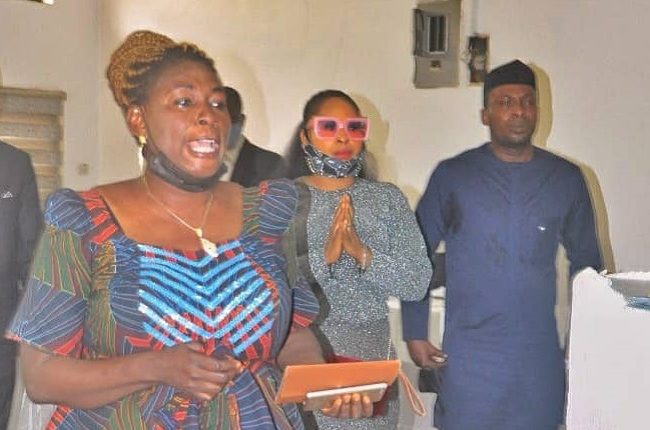 There was a mild drama today before the independent investigative panel on human rights violations by the defunct Special Anti-Robbery Squad (SARS) and other police units when some relatives of a victim of an alleged extrajudicial killing by police operatives disrupted the testimony of the first respondent in their petition.

The family of the deceased, Festus Idehen, had petitioned the panel, alleging that he was extrajudicially killed by the police.

The petitioner joined ASP Kingsley Ojeomokhai of the defunct SARS, Federal Capital Territory (FCT); defunct SARS, FCT; Commissioner of Police, FCT and the Inspector-General of Police as respondents in the petition marked 2020/IIP-SARS/ABJ/104.

The relatives, including the elder sister to the late Festus, Mrs Doris Idedia, raised objections to the testimony of Ojeomokhai, who was narrating circumstances leading to the death of the deceased in 2016, alleging that he was lying against their late brother.

They called the police officer unprintable names and cursed on him as well, saying that, “You will see.”

This made the panel to asked them to apology and further sent them out of the venue of the panel sitting.

Subsequently, the chairman of the panel, Justice Suleiman Galadima (retd), urged petitioners appearing before the panel to always conduct themselves in a civil manner, warning that, “unruly behaviour will not be tolerated.”

Testifying on the death of Festus, ASP Ojeomokhai informed that on August 28, 2016, he was assigned with four other officers to investigate a case of criminal conspiracy and armed robbery involving two suspects, Lawal Mohammed and Abubakar Mohammed.

According to him, Lawal Mohammed had claimed in his statement to the police that they sold a stolen Mercedes 350 Jeep, black to one Onyeka in Kafanchan, who is an in-law to Festus Idehen, the deceased.

He informed that on September 2, 2016, he launched a signal activity to the Kaduna Police Command and also documented their arrival at Area Command in Kafanchan to apprehended Onyeka and Festus.

Led by counsel for the police, Umoh Inah, the first respondent added that also alleged that on September 3, 2016, Lawal Mohammed and a police team including himself moved to Onyeka’s house to effect his arrest, adding that Onyeka admitted to selling the said car to Festus Idehen, under interrogation.

Ojeomokhai said he then instructed Onyeka to put a call to Festus, saying that the former called the latter that he had the laptop for sale and Festus agreed to meet him at Gonin Gora, a suburb in Kaduna, to check the laptop.

“Immediately we moved to Gonin Gora to await Festus’ arrival. Festus came to Gonin Gora in the alleged stolen Mercedes and when he sighted us and others, he raised alarm and called us armed robbers, inciting an attack on us, while driving away in the Mercedes jeep,” the respondent told the panel.

He said a mob gathered and wanted to attack him and his team, adding that he had to quickly identify himself as a police officer and informed the mob that they were rather there to arrest Festus over allegation of a stolen jeep.

According to him, on learning that the accuser was the real robber, the mob then went after Festus, who unfortunately got stuck on the road, which he said made it easy for the mob to descend on him with dangerous weapons.

“It took the intervention of one of my members, Inspector Okey Samuel, to rescue Festus from the mob, though his leg had already been broken and they were about to crack his head with a big stone.”

Ojeomokhai alleged that while trying to rescue Festus, another set of mob attacked his personal tinted Volkswagen Gulf car.

“They turned it upside down while attacking Onyeka and Lawal inside. I had to call for reinforcements from Kaduna Police Command and the mob were dispersed,” he said.

According to him, the injured suspects were all rescued and taken to the Barau Umaru Dikko Hospital in Kaduna where they were admitted and treated, informing that as a result of his broken leg, POP was administered on Festus.

Ojeomokhai further told the panel that the Festus’ mother told him that the family did not have money to pay hospital bills when their son was being treated in the hospital he was taken to in Kaduna after being beaten by the mob.

He informed that based on this, he paid N42,500 for the medical bills of the late Festus, adding that the deceased was thereafter taken to Abuja where he could be further treated at police clinic.

These led to the emotional outbursts by the relatives of the deceased present at today’s sitting, calling him a liar.

Continuing his evidence, Ojeomokhai informed that upon transferring the deceased to Abuja on September 5, 2016, he took Festus to the Police Clinic for further treatment, adding that after he was discharged, he (Ojeomokhai) placed him under custody.

He added that on September 6, 2016, he took Festus to Asokoro General Hospital for further medical examination, informing that the doctor who diagnosed him said he had lost a lot of blood and might not survive.

He said that he tried to get blood for transfusion for him, informing, however, that, “but Festus later died in the evening.”

Under cross-examination, ASP Ojeomokhai informed that the Mercedes jeep in question had been registered and was with the police exhibit keeper, adding that while Onyeka had been released on bail, other suspects in the case were still in police custody.

After Ojeomokhai’s evidence, Justice Galadima (retd) directed the respondent counsel to make available the hospital admission and treatment records of both the Police clinic and Asokoro General Hospital at the next adjourned date.

He then adjourned further hearing till April 7.

The British Parliament at the Westminster Hall held a debate on ‘e-petition 554150, relating to Nigeria and the sanctions regime’ on Monday. The government of the United Kingdom has however responded…Drama at NHRC panel  Drama at NHRC panel

The surprise visit made on Friday night by the leaders of the ruling All Progressives Congress (APC) to former President Goodluck Jonathan at his residence in Abuja triggered a stir in the major political camps, resulting in at least four possible theories..Drama at NHRC panel  Drama at NHRC panel