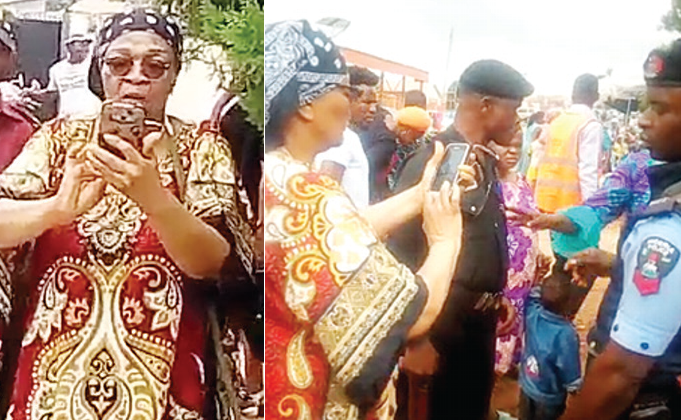 Share
Pandemonium broke out on Wednesday evening in Ijapo Estate of Akure, the Ondo State capital, when a serving Judge of Court of Appeal, Akure Division, Justice  Folayemi Omoleye, allegedly disrupted the service of the Redeemed Christian Church of God (RCCG), Glory Tabernacle, over  noise from the church.

Justice Omoleye, whose residence shared the same fence with the church also allegedly assaulted a 68-year-old woman, Felicia Akindurodoye and the  Parish Pastor, Felix Solomon, during the melee.

It was gathered that the Appeal Court judge who had been complaining and confronting the members of the church for a long time over the noise from the church, stormed the church during the Wednesday service, recording the activities of the church with her handset.

He said Justice Omoleye had visited the church severally to complain about the noise emanating from the church during its service.

The source, however, said, church members who were at the service perceived the action of the judge as mischievous and  challenged her which led to the pandemonium.

He said it took the intervention of the men of the state Police Command from Ijapo Estate, to settle the confusion which had degenerated into a free for all fight.

He explained that the policemen restricted the judge from recording the activities while the 68-year-old woman assaulted was rushed to the State Specialist Hospital in Akure.

He said “Justice Omoyele stormed the church with her handset to record the activities of the RCCG,  Glory Tabernacle Parish, Ijapo, after complaining of being disturbed with the noise from the church.

“Some of the church members tried to stop her but a 68-year-old woman was slapped while one of the pastors in the church who tried to advise her not to disrupt the church service was assaulted.”

The Pastor in Charge of the Church, Pastor Dele Oyesola, described the development as strange and avoidable.

He explained that the church has been in existence in the area since 1989 and planning to celebrate its 30th anniversary, saying the land was approved for the church by the
Ondo State Housing Corporation in 1989.

He said the Judge bought the building beside the church some 10 years ago and could not explain the reason behind her action.

Also confirming the incident, the Pastor in charge of RCCG Region 22, Ondo, Pastor Idris Umar, frowned at the action of the Appeal Coirt judge, but said the church had directed its lawyer to petition the  National Judicial Council, (NJC) over the judge’s action.

He said the action of Justice Omoleye, slapping and beating a 68-year-old, was the least expected from her as having judge and said the petition would be forwarded to the NJC, to investigate Justice Omoleye’s action.

The Ondo State Police Command confirmed the incident and said it had started investigation on the alleged assault on the worshipers and the pastors of the RCCG by the Court of Appeal judge.

The state Police Public Relations Officer, (PPRO) Mr. Femi Joseph, who confirmed the incident said, the command had interrogated the judge over the incident.

He said, ” We can confirm the incident, and the DPO (Divisional Police Officer) led a team to the scene and we have interrogated the judge. We have also commenced investigation into the matter.”

However, all efforts to reach Justice Omoyele were not successful and her mobile phone phone was not available .