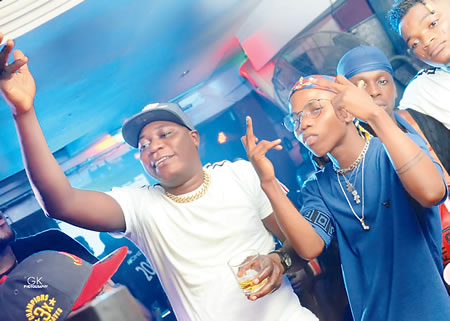 Record label executive, Yusuf Abdou Ramy also known as Doro Bom has unveiled its strategy to help take music talents to the next level under its imprint, Doro Musik Gang.

As part of its plans, the label recently signed ex-YBNL artiste, Opeyemi Babatunde Rahim popularly known as Lyta. The singer’s music career had made a passionate cry for help after falling out with his ex-record label.

Clearing the air on the singer’s new deal, Yusuf Abdou Ramy noted that the label discovered an opportunity in the singer, adding, “Lyta was already making waves before he got signed to the label. Of course he was not contract binding to anybody or any label and we at the label saw an opportunity to sing a young and futuristic act with the mindset of progressing in the industry,” he said.

While speaking more about his antecedents and his record label, the showbiz executive who is born to a Nigerian mother and Cameroonian father expressed commitment to connecting African talents to the world.

“I schooled partly in Nigeria and Cameroon before completing a degree in Business at University of Buea in 2010. With Doro Musik Gang, I want to capitalize on the growing entertainment market across Africa to the world through the production and promotion of high quality entertainment.

We are a multimedia entertainment company which will supply profitable, positive, audio and visual entertainment to a diverse, international consumer group. Doro Musik Gang is committed to wholesome entertainment across the board and firmly believes that quality, palatable entertainment can be realized without compromising commercial appeal,” he revealed.

Doro Musik Gang launched out officially in August 2018 with songs from its act, Bobby Jazx such as Kowope, Key, Show Dem featuring Zlatan among others. The label has helped Lyta to release the hit song, Monalisa with a remix featuring Davido.

My wedding will be like a movie, says Davido