We shall look into your demands ― Chevron 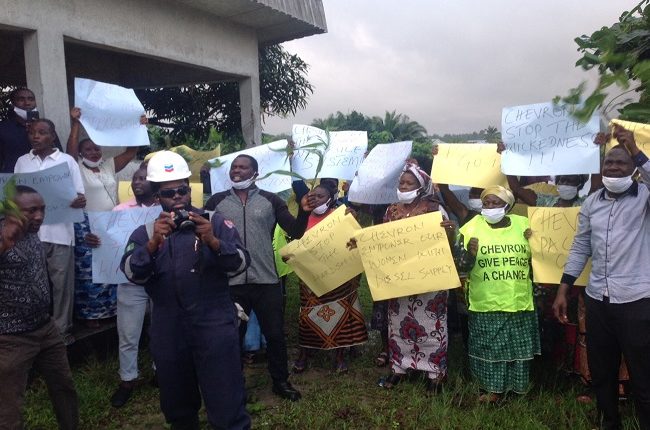 Abiteye Security House Boat is located at the Abiteye Oil Field which produces 42,000 barrels of crude oil per day with the Nigerian National Petroleum Corporation (NNPC) and Chevron Nigeria Ltd having 60 per cent and 40 per cent shares respectively.

Leaders, elders, women and youths of Benikrukru, in their hundreds, besieged the gate of the Abiteye Oil Field at the wee hours of Wednesday to register their displeasure over what they termed: “inhuman treatment, oppression and marginalisation” of the people by CNL.

Armed with placards reading “Chevron, recognize our welders and fitters,” and Chevron, stop the divide and rule system,” among others, spiced with revolutionary chants, they requested a stop to all forms of environmental degradation of their communities.

Chairman and secretary-general of Benekrukru community, Boan Solomon Eris and Comrade Kingsley Ukulu, who led the peaceful protest, reeled out from a letter addressed to Mr Jeffrey Ewing, Managing Director of CNL, other demands to include contracting labour and catering services to indigenes of the communities.

Besides the request for an urgent recruitment of qualified indigenes of the community by CNL, the leaders added to their demands contracts for crane and forklift, a supply of in-house equipment, diesel and marine transport service.

“The main drive for this protest is all about the movement of the houseboat. The houseboat is the only material that Chevron released to us to have income monthly.

“As we speak now, they are about to move the houseboat away which will leave the community in hunger. So, we are saying that the houseboat should remain,” Boan Eris pleaded.

Women leader of the community, Madam Elizabeth Lagbo, who addressed journalists, warned that there’ll be no peace henceforth in the area if CNL refused to give employment to their women and youths.

A representative of Abiteye, an extension of Benikrukru, Sculptor Austin Ojo, who said the people have taken their destiny in their hands, also implored CNL to heed the demands of the people to avert a shutdown of the facility.

Meanwhile, a representative of the Abiteye Platform Supervisor, CNL, Mr Francis Obodo, who addressed the protesters, appreciated their peaceful nature and assured them he would pass their message across to the appropriate quarters.

“I thank you for this peaceful protest. I assure you that Chevron is a socially responsible company. Whatever demands you have brought in this morning, I’m assuring you that I will communicate it to the appropriate quarters and in no time, you will hear from us,” he noted.