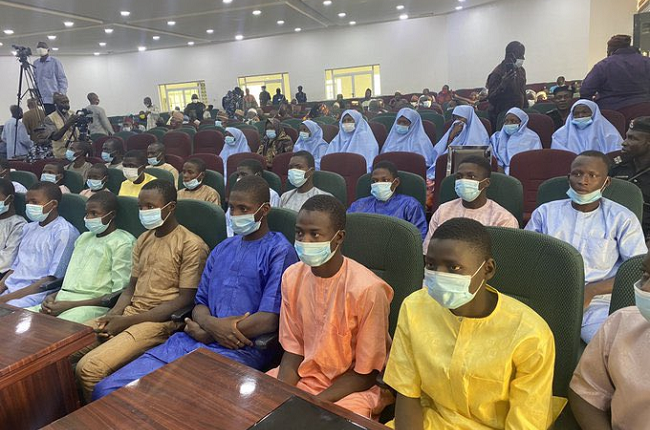 Niger State Government has promised to secure all schools from all criminal elements in order to allow students and pupils to pursue their education.

The State Commissioner for Education, Hajiya Hanatu Jibrin Salihu gave the assurance while speaking on behalf of Governor Abubakar Sani Bello on Sunday while handing over the released students and teachers of Government Science College Kagara to their relatives in Minna.

The commissioner said that plans were already on towards making sure that schools were safe in the state especially the boarding schools.

She thereby urged the parents not to be discouraged by what had happened and not to stop their wards from schooling, emphasizing that the government was taking precautionary measures to ensure that the schools were safe.

The commissioner explained that arrangements have commenced to allow the SS3 students to write their final year examinations.

“We are in contact with the SS3 students and working out how best we can help them so that they will write their exams. And I am sure at the end of the day, we will come out with something productive for them,” she said.

Salihu, however, thanked them for their patience during the trying period, urging them to remain strong in trusting God.

Also, the Principal of the College, Mallam Dan Asabe Ubaidu who commended the state government for securing the release of the kidnapped victims, explaining that he worked in collaboration with security agencies when the abductees were still in captivity.

He enjoined the students not to give up on their quest for education and urged them to pick their books in order to engage in serious reading and group discussions with their fellow students.

“I hope this will not deter you from education, because education is a weapon to fight against societal vices, especially those who masterminded your abductions.

“Go home and be strong. You, the SS3 students should read your books to prepare you for your exams. What you don’t understand, ask your friends. But, in all, see what happened to you as an act of God,” he advised.

Meanwhile, parents that were all around to receive their wards and other relatives could not hide their joy as they were visibly happy to be reunited.

Insecurity: Excuses from our leaders no longer acceptable ― PGF DG