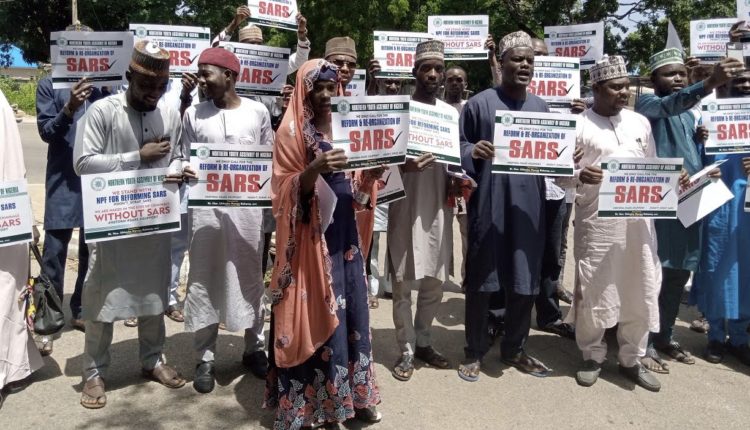 While the trending issue across the country is the protest for the scrapping of SARS by Nigerians mostly youths, a development that has led to some lost of lives, Northern Youth Assembly of Nigeria has called on the IGP, Mohammed Adamu to instead of doing away with the operation of FSARS as being demanded, reform it in line with accepted world policing standards.

It opined that, “Scraping or ending the operation of FSARS in the country may not provide lasting solution to criminal activities, instead it may provide the chance for criminals to return to the streets and continue their illegal operation.”

The NYAN stated that, “Rather than calling for the scrapping of SARS, let us all joint hands to support the reforming of SARS for optimum performance without violating human right of any individual include the suspects.

The Youth Assembly while addressing Journalists on Sunday at the NUJ Press Center called on Nigerians to, “let us support the reformation of the unit to provide better services to Nigerians. Scrapping SARS will never be a final solution to the Police or Nigerians at the time when cases of social vices and criminality are in the increase but we support total reformation of SARS in the country.”

National Speaker of NYAN, Ukkasha Hamza Rahama (GCNY) who read the statement of the Assembly stated that, “We are also in support of prosecuting any security personnel who violates fundamental human right of any suspects to serve as deterrent to others.”

Ukkasha Hamza added that, “We, in our organization, we strongly kick against any humiliation, harassment or intimidation by any security personnel instead to follow the laid down rules of apprehending and prosecuting of any suspect as is the practice in developed nations. However, we are totally against the scrapping of SARS but instead we are in support of reforming the FSARS to enable them operate in a professional manners were good citizens will appreciate them more.”

He added that, “Also, the decision of the present IGP to order that henceforth, CP in charge of FSARS, CPs in charge of State Commands, and FCT as well as their supervisory Zonal AIGs will be held liable for misconduct of personnel of FSARS and others within their jurisdiction as a welcome development all aimed at checkmating the illegal activities of FSARS.”

“You are very much aware that there is no development in any nation, State or organization without peace and free-crime in the society. We also have the believe that security personnel played a very vital role in every society towards ensuring crime free society through safeguarding their lives and properties”, he added.

The NYAN National Speaker further said that, “It is a fact that Nigeria Police Force have a constitutional role to play in every society in the country, just like the constitution of the Federal Republic of Nigeria provides the freedom of speech, freedom of movement etc.”

“We have the believe that the decision of the Force to establish special anti robbery squad was done in good faith to checkmate the Illegal activities of kidnapping, banditry and armed robbery cases in the society following the rampant cases of the harassment and lose of valuable items to the men of the underworld”, he also said.

He However said that, “some men of the Nigeria Police Force have turned the establishment of SARS in every angle and corners of the country to avenue of harassment and intimidation which generated outcry in some quarters.”

“Therefore, the recent decision of the Inspector General of Police (IGP) to ban FSARS, STS AND IRT from routine patrol on the streets, as well as the decision of the IGP to ban personnel of FSARS to embark on patrol or tactics assignment in mufti, in addition that they must appear in their police uniforms or approved tactical gear while on official assignment, can be seen as a good step in the right direction in his effort to ensure professional outlook to the Nigerian Police,” Ukkasha Hamza Rahmana concluded.