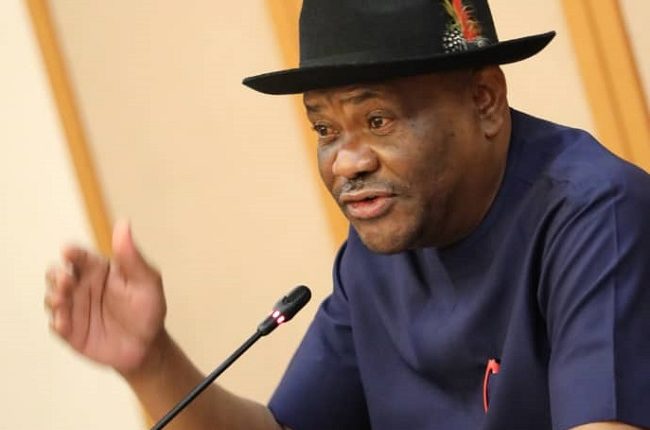 Rivers State Governor, Nyesom Wike, has counselled Rochas Okorocha, a former Imo governor and his family members not to be discouraged by the current political prosecution they are undergoing, describing it as the lot of conscientious politicians.

Wike, who said he has braced for political travails after his tenure, advised Okorocha to continue to pursue his vision of a new Nigeria, adding that his present challenges are meant to dampen his spirit and force him to abandon his ambition.

Okorocha has been having a running battle with his successor, Governor Hope Uzodinma, resulting in the seizure of properties belonging to his family members, as well as facing a probe by the Economic and Financial Crimes Commission (EFCC).

He was recently detained by the Anti-graft Agency for 48 hours before he was granted bail.

But speaking in Abuja, during the dedication of Uche Nwosu’s son (Okorocha’s grandson), Wike, noted that the kind of political battle Okorocha and his wife had been through would cause them to rely on God and not on their strength.

According to him, “political prosecution will come, especially after you have left office, so what you’re going through today is not peculiar with you and your family. I know they will come after me but am prepared, I am ready for them.

“You should be strong and put your trust in God. I don’t stay close to people in power, particularly this kind of power, you see in life, I was looking around to see Governors, I know if Uche Nwosu is a sitting governor, you will see a lot of governors here, if Rochas was governor you would have seen a lot of governors here, life is like that, for me now I don’t even live in the government house, I have parked out, even though I still have two more years, I am tired so I had to leave.

“Particularly again when you have a system that is not doing well, the truth must be told. Many people don’t like the truth that is why they don’t like me.

“You said this is APC hall, I came here I didn’t see any APC member, today I’ve converted it to Christian hall. The way I do my thing, nobody can stop me or tell me who can be my friend. Nobody in this country can tell where to go, nobody.

“Owelle is facing a lot of crisis, it is not easy to pass through these crises, but it will come but it is over. I want to encourage you and your son-in-law to be strong, if it doesn’t happen like this you won’t know that God loves you.

“Just like Rochas, God has given everyone his talent, when I watch your son-in-law from far, I say you have a good son-in-law that is not arrogant, not a son-in-law that does not understand what marriage is all about, I wouldn’t have come. I will be in Imo State soon and I will tell them my mind. You should thank God,” Wike said.

The Rivers governor commended Nwosu and his wife, Uloma, for organising church service to dedicate their son to God, adding that the reason he has survived several fierce political battles was that he had never stopped giving thanks to God.

Wike, however, explained that his coming for the child dedication was devoid of politics or political affiliation, adding that his relationship with Senator Okorocha, who is a chieftain of the All Progressives Congress (APC), started in 1999 when he was the chairman of Obio-Akpor Local Government Area of Rivers State.

“I’ve known him since 1999 when I was chairman of the council. I didn’t know him today, so I don’t because of politics or whatever it is, abandon people. It is my character to always keep my friendship with people. It is not based on party or politics. Friendship is friendship,” Wike stated.