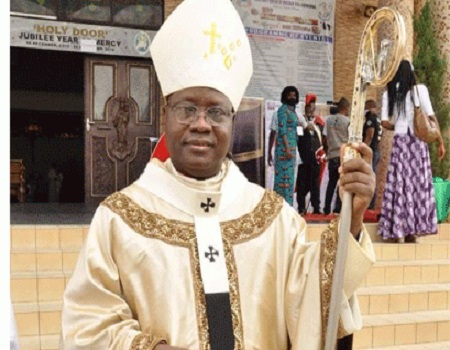 Most Rev. Ignatius Kaigama, the Archbishop of Abuja Catholic Archdiocese, has cautioned youths against allowing tribal and religious sentiment to divide them.

Kaigama, in an exhortation at a Prayer Programme – Holy Hour With The Youth – at Our Lady Queen of Nigeria Pro-Cathedral on Saturday in Abuja, urged the youths to stand against disunity and vices.

“You must be wary of sentimental and divisive remarks such as ‘they are southerners with an agenda’, ‘they have a northern religious motive’ and ‘this is against our religion’.

“These are the statements that pit you against one another; they stop you from an audacious and unanimous resolve to seek better life by ending corruption at both low and high levels.

“Do not be deceived by ethnic and religious jingoists. Have sound moral principles and a firm faith, and work for what benefits humanity rather than parochial interests.’’

“My beloved youths, let us admit that what is wrong is wrong. If children are abused, young girls are raped, palliatives for the poor are diverted, people are kidnapped, and if positions are not given on merit, we have a long way to go.

“Whether as youths or elders, we are all in one way or another guilty of corrupt practices and we should seek purification and forgiveness from God.’’

He said that during the EndSars protests, he kept praying that the voice of the Nigerian youths would be clearly heard, especially as they were conducting themselves in a peaceful and courteous manner.

“Unfortunately, some forces of evil introduced killings, looting and vandalism into an otherwise laudable initiative.

“The infiltration by hooligans distracted the noble cause that would have shown the world that Nigeria is on a new and higher level of political and social maturity.

“This destroyed the noble aspiration of the youths in our country and showed that we still suffer a moral weakness, which makes it very difficult to pursue the common good as one nation.

“Your noble cause was disrupted by unscrupulous elements, leaving us with many unanswered questions.

“The posers are many: Do we have the capacity as Nigerians to begin something positive that cannot be hijacked or crippled by those who suffer a kind of social or political paranoia?

“Is it possible to avoid introducing tribal sentiments, religious factors and the north/south dichotomy as we pursue the common good of this nation?

“Is it possible not to worry about who may feel offended and to engage in non-violent struggle for positive change beyond narrow boundaries or prejudices?’’

The Archbishop, however, urged the youth not to import corrupt practices into the Church, urging them to be watchful and avoid importing such mentality into the Church.

Stakeholders brainstorm to tackle second wave of coronavirus in Lagos