• We are working for a safer Nigeria ― Army Chief 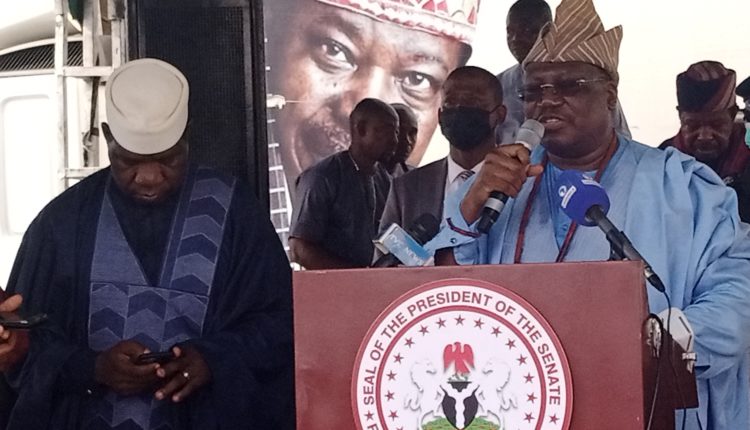 The Senate President, Senator Ahmad Lawan has appealed to Nigerians not to abandon the Federal government in the fight against bandits, terrorists, and kidnappers across the country.

Making copious reference to the issue of terrorism and kidnapping across geo-political zones, he urged Nigerians to perceive security as a collective battle rather than sectional

He spoke in Iyin-Ekiti, Irepodun/ Ifelodun local government area of Ekiti State after he was conferred with a chieftaincy title of “Akorewolu of Iyin Ekiti” by Oluyin of Iyin kingdom, Oba Adeola Adeniyi Ajakaye.

Lawan, who represents Yobe North, stormed the town in company with over 30 Senators, including the Federal Lawmaker representing Ekiti Central Senatorial District, Senator Opeyemi Bamidele, who donated a coaster bus to the Oluyin-in-Council.

Lawan, who thanked the monarch for the honour, said, “The Senate has done what we need to do to make Nigeria great. Our leaders who set a vision for the country came from different constituencies, backgrounds, religious inclinations, but they had a vision that Nigeria should be the best in Africa.

“Challenges were faced, but those leaders dealt with some of them and subdued them. Other subsequent leaders also had the vision to make Nigeria a country that will be progressive and develop.

“Now, we are facing security challenges all over the country. political, religious, and traditional leaders must come together. Whether the problem is predominant in the Northwest or Northeast or Southwest or East, all hands must be on the deck to resolve all these challenges.

“As a matter of urgency, we should come together as a people and deal with these challenges, most of them if not all of them, and make Nigeria a great country. No part of Nigeria can entirely face the problems facing the country and tackle them all.”

Lawan described Bamidele as a reliable politician, who values integrity, propriety, professionalism, and the development of the country, especially Ekiti State.

“Senate had passed a bill on Wednesday establishing Medical University here in Iyin Ekiti through a bill sponsored by Senator Bamidele. I will make sure I lobby President Muhammadu Buhari to assent to the bill so that the university can take off in time,” he said.

Also Speaking about the dreaded insecurity situation facing Nigeria, the Chief of Army Staff, Lt. Gen. Farouq Yahaya, said the Nigerian Army is working tirelessly to secure the nation. by containing the activities of terrorists and bandits, killing and kidnapping the citizens, thereby subjecting the nation to unnecessary chaos and panic.

“The Armed Forces are doing their best to secure the nation and we will continue in the task of making Nigeria free from this present situation.

“Security is a business of everybody, all stakeholders, particularly the community leaders. It is the responsibility of every Nigerian. We appeal to Nigerians to join us in the task of securing the nation.

“We are ready to work with other sister agencies to secure our nation. We are also tapping from the experiences of those that had served before us in the Armed Forces to guide us in my present task of securing the nation,” the Chief of Army Staff said.

While addressing his constituents, Bamidele, said he would continue to work hard to attract dividends of democracy to Ekiti State.