DjKaywise, Tclassic team up in yes or no music video 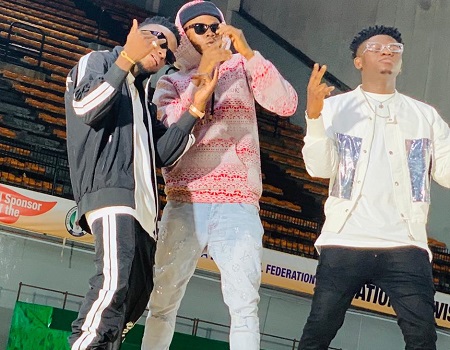 One of Nigeria’s fast rising Afro-pop sensation, Tclassic has had a good year from dropping hit songs and videos back to back to performing at major gigs and getting nominations for big awards within and outside the country, it is safe to say that the Nobody Fine Pass You singer is living his dreams.

The singer, who is signed to Mix Naija Entertainment (MNE), has teamed up with popular award-winning DJ, DjKaywise to give their fans another beautiful tune entitled Yes or No.

Produced by Krizbeatz, the song was released at a time when Tclassic was still basking in the success that greeted his previous singles.

DjKaywise, on the other hand, has emerged as one of the hottest and most booked DJ in the country and outside with shows and gigs lined up for the young man.

They both joined forces together with the expertise of Krizbeatz to produce another song that has been ruling the airwaves for over a month now.

The video of the song, which was shot by Naya Effectz in Lagos State has also been released and is currently leading music video charts across the country.

Speaking on his rise and the new project, Tclassic who is planning a UK tour soon said he was excited to have worked with DJ K as he’s fondly called, adding that the song Yes or No was a masterpiece that would shake the music industry once again.

“The progress of my career is quite impressive and I am willing to keep going. Dj K and I have been working together for a while so, this new song was a pointer to the fact that we understand ourselves”, he said.

Also speaking with R on his career, DjKaywise, who calls himself Okiki, hinted that from the moment he realised that he had to work hard and push his career with all he has, he has never stopped working, adding that working with Tclassic on the new song was just one of many that would be coming.

He assured his fans that a new song and video would be dropped before the end of the year.

Olota of Otta, others, task federal government on tourism development

Kogi election: we will accredit media that meet the standard ― INEC