Distribution of over 41,000mt grains to 5 million households ongoing ― Minister

•To institutionalize Zero Hunger Round Table 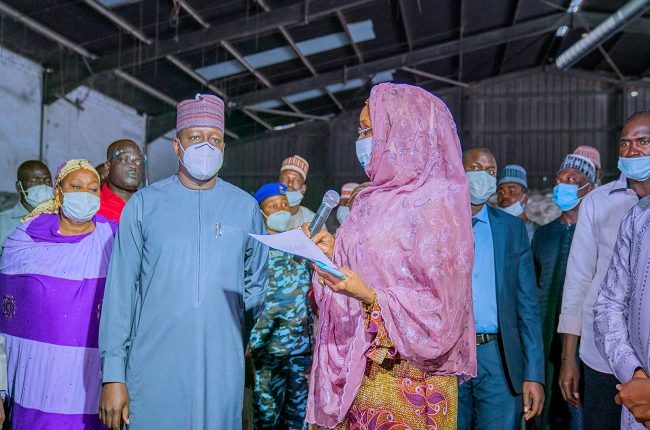 The Minister who gave the assurance in Abuja, during the National Food Security Council meeting held at the Presidential Villa, disclosed that over 41,000 metric tons of grains from the Strategic Grains Reserves expected to reach over 5 million households have been handed over to 19 State governments and the FCT.

In her presentation, Hajiya Sadiya stated that the initiative is being institutionalised as part of the Ministry’s response to the challenge of hunger, aggravated by the lockdown with focus on eliminating hunger, achieving food security, improving nutrition and promoting sustainable agriculture by 2030 with relevant stakeholders.

Farouq recalled that the modified National Home Grown School Feeding Programme and Take Home Rations (THRs) were provided for 127,589 vulnerable households during the lockdown with children in primaries 1 to 3 in public schools in the FCT, Lagos and Ogun states while 164 trucks of food items were also distributed to 36 states and the F.C.T. as palliatives through donations from the Nigerian Customs Service.

“As of today, over 41,000 metric tons of grains from the Strategic Grains Reserves expected to reach over 5 million households have been handed over to 19 State governments and the FCT. Distribution is ongoing through NEMA based on the presidential directive.”

The Minister stated that the Zero Hunger Roundtable is working in agreement with the Federal Ministry of Agriculture and Rural Development and some top private sector executives like Tony Elumelu, Tonye Cole as well as Sahel Consulting, IFPRI, IITA, NESG, FAO, IMMAP, ECOWAS and others.

She enumerated data of Poor and Vulnerable Households, strategic partnerships, job creation and impacting the agricultural sector as well as strengthening the food value chain by connecting farmers to markets, increased local production of nutritious food, strengthening strategic food reserves with the Ministry of Agriculture and Rural Development and other critical stakeholders as long -term sustainability strategies to achieving Zero Hunger in Nigeria.

The Zero Hunger Roundtable was convened by the Minister on May 5, 2020, in conjunction with the World Food Programme to bridge the gaps in resources and pave new collaborations for lasting and sustainable change and progress.

What I Told Trump About Christian Massacre Allegation ― Buhari
President Muhammadu Buhari, on Tuesday, revealed his response to President Donald Trump over the American leader’s allegation that the Nigerian government was slaughtering Christians, telling him that the problem between cattle testers and farmers was a cultural thing rather than ethnicity or religion…Distribution of over 41000mt grains  Distribution of over 41000mt grains

Constitution Review: Middle Belt Congress Seeks Additional 19 States, Abolition Of Local Councils
Ahead of the proposed amendment of the 1999 Constitution by the Senate ad-hoc committee led by Senator Ovie Omo Agege, the Middle Belt Congress has submitted a memorandum to the Committee.
Investigation revealed that the MBC is seeking for the creation of an additional 19 states in the country to make the total number of states to 55…Distribution of over 41000mt grains Distribution of over 41,000mt grains