A review of OBC Nwolise’s book, Bullet Kills the Terrorist and Insurgent, But Not His Ideas, by Lucky Ukperi 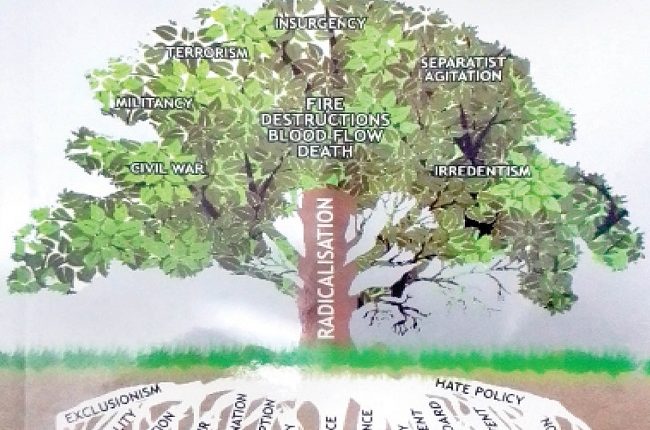 THE uproar and reactions which trailed the Federal Government’s attempt to re-absorb repentant and rehabilitated insurgents back into different communities, especially in the northern parts of Nigeria primarily stems from the information disconnect that existed between the society and the authorities in charge of the fight against insurgency. Nwolise’s book, Bullet Kills the Terrorist and Insurgent but not his Ideas, bridges the seeming communication gap by providing a platform for all Nigerians as well as peace lovers to look critically at the issue of insurgency and the acts of terrorism.

The book, which is a work of many years of research by the scholar, proffers  solutions to the persistent cases of insurgency, terrorism, and conflicts in Nigeria, especially the North-East. The scholarly research encapsulates a major aspect of Professor Nwolise’s sojourn in the field of political science and peace and conflict studies.

The author acknowledges that the book evolved from his work with/in the Nigerian military resource centre. The 160-page book is divided into six chapters and a short conclusion followed by bibliography and appendices.

From the introduction, Nwolise reveals the global dimensions of insecurity spawned by terrorism and insurgency with prominence given to African countries. Nigeria comes out as a template to interrogate the many security threats to the world. Nwolise identifies and stratifies contemporary threats to Nigeria’s national security into two: physical and spiritual. Within the physical dimension, we see 76  situations such as war, international terrorism, subversion penetration, cross-border banditry, piracy and sea robbery, toxic waste dumping, epidemic and pandemic disease, terrorism, militancy, unemployment, rape, corruption, poor governance and others broken down into external security threats, cross-border security threats and internal security threats while the author identifies 30 threats under the spiritual dimension, some of which include the wrath of God, wrath of local deities, spells, cultism, Yahoo-plus, dream manipulation and breaking spiritual covenant.

The author transcends theoretical treatise by drawing on real life experiences and researches by national and international experts in the field of conflict resolution as he presents findings of the root causes of radicalisation/terrorism in eight countries based on a debate by the United Nations General Assembly (UNGA).

Nwolise primarily sets out to proffer alternative solution to resolving the issues of insecurity created by terrorism and insurgency, thus, he advocates non-kinetic methods such as the establishment of Terrorism Disengagement Centres and Deradicalisation Centres for disengaged and repentant insurgents. Not unmindful of limitations, the author presents how similar situations have been handled by other nations. The counter-radicalisation policy is advocated for communities that have had experience with insurgency and terrorism while a massive process of reconstruction, rehabilitation and development of new projects should begin in areas affected.

Nwolise commends efforts by the federal and state governments, as well as non-governmental organisations but he does not shy away from  drawing attention to their failings when he observes “But all these interventions are not coordinated from a central point…” he concludes that “what is on ground, and what is happening in the North-East now is a far cry from what is needed  and expected to uproot the Boko Haram, stabilise the region, catalyse recovery, and ensure lasting peace.” p89.

Nwolise advocates for the need for a non-kinetic measures as opposed to the largely kinetic being utilised in the decade-long conflict. Non-kinetic approach is hinged on developing a comprehensive framework of action in order to harness all available resources to effectively tackle the many issues surrounding the attempts to bring an end to terrorism.

Still on the killings in Southern Kaduna

Teaching parents to plan for their children’s future