Dissecting Okediran’s Keepers of the Tribe 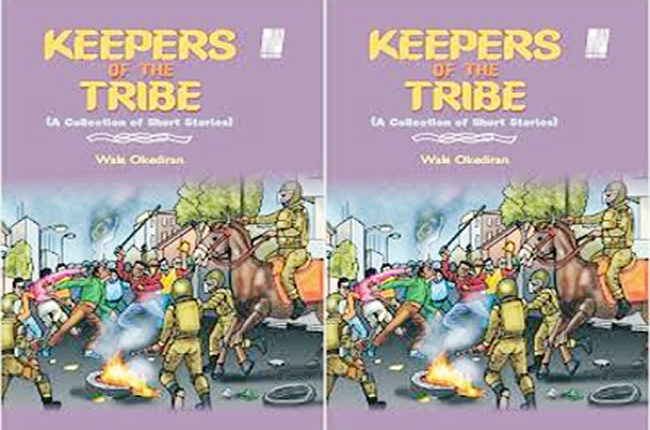 A review of Dr Wale Okediran’s collection of short stories, Keepers of the Tribe, by Ikechukwu Nwaogu.

Okediran chronicles (in fiction, of course) his experience as a lawmaker, a father, a medical practitioner, adviser, and mentor.

In the stories, which have a variety of themes, he pays homage to his training and practice in the medical profession, touching on sensitive topics like religious killing, fatherhood, drug trafficking, and the plight of widows.

A number of the stories have been released in various media and publications over the years, but they have never before been presented in one solid, cohesive and coherent body of work.

Again and again, he showcases his wealth of experience, turning to different climes and regions to site his work.

The strong introspection in ‘Holy Moses’ is very gripping; ‘’At that point, the sleeping figure stirred and Zacchaeus jumped with fright.  A plaintive murmur now rose from the man; a murmur, saddening and startling as if another human voice, different from that of the prophet started emanating from the sedated figure. Sounds hesitating and vague now flooded the room.  From a whimper, the sounds ascended into the level of a growl before descending slowly into words that flowed out gently from the prophet’s feverish lips in a murmuring stream of soft and monotonous sentences. Where can one…lay the…heaviness…of one’s trouble…but in a friend’s heart…?”  The prophet sighed, paused for a while and then droned on; “I trusted my friends and my brother but there is no worse enemy and no better friend than a brother…” His voice fainting. Then another sigh, and then a stir and soon, he was snoring.’’

In ‘The Patient With The French Bible’, Okediran examines the Nigerian health sector, marriage vis-a-vis parental consent and the inhumanity of man, where a parent, without meaning to, brings his daughter a great deal of sorrow by refusing kindness to an injured patient.

The story begs us, in its own way, to remember our humanity, as kindness is a debt that is always paid back with interest, and from the most unlikely of sources. His exposition of the health minister’s behaviour was very disturbing; ‘’Cocooned away from him, the distant images of unknown faces in poorly equipped and overcrowded hospitals have all been drowned by files of contracts, staff promotional exercises and allocation of health manpower.”

Now, face to face with reality and in the midst of his official aides, journalists and television cameras,  Dr  Bature found the visit most disagreeable.  Apart from the heat and flies, the hospital floor was still filthy despite all hasty attempts to clean it.

Although the nurses were clothed in sparkling white uniforms, he knew that they would take them off once he turned his back.  The bed sheets were clean, but he was able to imagine what was hidden beneath them.  Yet, all that was of no importance.  What mattered to him at that point was for him to complete the inspection in the eyes of the journalists and hurry back to Lagos to the comfort of his air-conditioned and perfumed office and hence to his Easter break with members of his family.

The title tale, ‘Keepers Of The Tribe’ took off on a high note with the trial of a populist leader: ‘’It was a cold overcast morning at the beginning of November when the great trial began.  As he stepped out of the Black Maria, the cold, dry harmattan breeze pasted the flowing blue robe of the accused to his body.  Instead of the robust person we were all used to, what we saw was a frail-looking figure who smiled and waved sadly to the crowd.

“The people all tried hard to hold back their tears as they looked at his drawn, exhausted but resolute face.  The more courageous of the crowd however erupted into a spontaneous outburst of Hail Juba! Hail Juba! as they tried to shore up their hero’s confidence’’.

The story ended with a reminder of the Yoruba proverb that “he who throws stones into the market will only hit his own children” is brilliantly brought to our consciousness, as the callousness of General Batuta backfires in a way that he never thought possible.

From the rustic background of the setting of ‘’The Dog Catcher’’ Okediran takes us to the cross country junketing of “The Search For Moses”, where a mother desperately in search of her missing son was forced to ‘steal’ the same son from the custody of his custodian who was not ready to release the baby.

As the reader moved from story to story, he encounters the sad and heart  wrenching tale of a medical student who encountered the body of his missing twin brother in the University’s cadaver room. The revelation was couched in an emotionally gripping rendition; ‘’ A wave of panic now swept through Kehinde as he stood quivering on the spot. Then as if in a trance, he went over to the cadaver, took another look and caressed the face.

He almost looks alive, Kehinde thought to himself.  At first, nobody in the room spoke but at the sight of Kehinde caressing his dead brother’s face, the room now buzzed with moans and whispers.

The ladies started whimpering and wiping away tears while the boys manfully resisted the tears. Even Jerome was doing all he could to fight back his tears. As the truth now hit him fully, Kehinde turned away, gasped, burst into tears and broke into a blind run through the narrow aisle of the laboratory knocking against the cadaver tables as he fled into the deserted corridor outside. At first, no one tried to stop him for they were all overwhelmed by the nightmarish spectacle’’

The same suspense and variety of themes and entertainment can be gleaned in the other stories such as ‘’A memory of Easter, ‘’Just One Trip’’, ‘’The Baby In The Storm’’, ‘’The Village Doctor’’ ‘’The Doctor And The Graybeards’’, This Too Shall Pass’’, The Search For Moses’’, ‘’Born In Kano’’ and  ‘’Election Day Fever’.”

The author relishes us with a dash of poetry in ‘’A Memory Of Easter’’ when the suicide victim asks the rhetoric question; ‘’Do you think I’m mad?’’ to which the doctor replied; ‘’ “You’re not mad.  You’re very hurt and frightened, and very desperate, and you feel you have no right to live because what you saw as your symbol of success is gone…. No, you’re not mad only disillusioned and there are no mercy killers for the disillusioned.  You’re the only one who can help yourself by getting over this painful and temporary setback.  The secret of joy is the mastery of pain.”

And in an unusual acceptance of the efficacy of traditional medicine, the medical doctor/writer observed thus in ‘’The Doctor And The Graybeards’’ ‘’Baba Oluwo opened his tiger-skin pouch, rummaged inside and brought out a deer’s horn, a small black gourd and a sharp knife.  He squatted at the foot of the couch and started applying a series of sharp cuts around the doctor’s swollen right ankle. As the sharp knife dug into his flesh, Dr Okoye squirmed and gritted his teeth; beads of sweat suddenly appeared on his forehead.  Soon, a bangle of blood appeared on the affected ankle. Baba Oluwo put down his knife and opened the black gourd. This powerful medicine can neutralise any type of poison be it that of snake, scorpion or any animal,” Baba said as he started to apply the black greasy stuff from the gourd into the fresh ankle wound.  As he worked, the herbalist chanted some incantation only audible to himself. Minutes later, a soothing feeling started to replace the pain and fever which had taken over the doctor’s body and limbs’.”

In the tension filled “This Too Shall Pass”   Okediran showcases his understanding of the human psyche; ‘’ with a descriptive skill and narrative prowess that assures us that, though his last published book was in 2009, his writing days are far from being over.

Readers from all walks of life will find a connection with the many characters that dance through the fifteen stories and two hundred and thirty four pages of laughs, tears, hopes, fears,  and the connectivity between “After The Storm” and “The Search for Moses” leads us to believe that there may soon be more to come.  Dr Wale Okediran has filled a book with characters we know, whom we can relate to, in their everyday struggles, and hopefully, learn to resolve our problems as they resolve theirs.