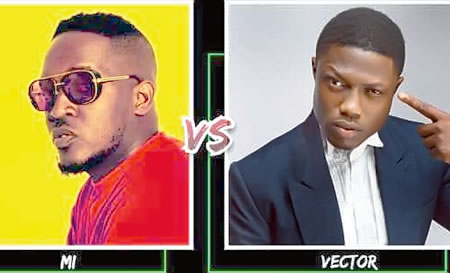 FAVOUR BOLUWADE chronicles the ongoing battles between Nigerian rappers, with the aim of finding out what the end game was for the industry.

The past few weeks have been filled with unending drama in the Nigerian rap industry with veteran, M.I Abaga, and Lanre Ogunmefun a.k.a Vector as main players.

The duo stirred up many controversies about who was the better rapper in the past and their fans had always massively supported their favourite. It wasn’t different this time with both rappers continually releasing ‘diss’ tracks, setting social media ablaze and revealing personal information while insulting one another, matters hitherto oblivious to the public.

Many who thought the battle between both rappers had ended long ago were proved wrong after both dropped tracks addressing certain issues and artistry.

Previously, rumours had spread that Vector was planning a major diss track that would be directed at M.I. Abaga, which he released truly in his single – ‘The Purge’, on September 20, 2019.

CEO of the Chocolate City, MI Abaga, weeks later responded to Vector with rap spiced with metaphorical lines that caught the attention of fans ,not only with the thought-provoking lyrics  but also  the title ‘The Viper ‘  which completes the appellation ‘Vector the Viper ‘.

Fans were forced to get interested in the squabble after from the rumpus from Davolee and Dremo, both rappers, who had taken  turns to attack each other.

Davolee was formerly signed to YBNL, owned by popular rapper, Olamide, and his antagonist Dremo, signed under Davido’s DMW.

The rap diss between both artistes Davolee and Dremo rushed social fans’ adrenaline. They were quick to tag and hash-tag their names and soon set Twitter especially on endless banters of who was better than who in the rap game.

Blaqbones, an upcoming rapper in the industry, also threw shots at Davolee in a song ‘ Define Rap’ where he was featured on by VJ Adams when he declared himself BRIA (Best Rapper in Africa).

A furious Davolee responded but not only did he use his ‘Giveaway’ diss rap to throw shots at Davolee who called him out, he decided to include Blaqbones,  MI,  Dremo and other rappers .

The battle continued on social media and while fans hailed, discussed, and set the rap industry on fire via tweets , Dremo released ‘,Scapegoat ‘ in the heat.

It was a question of who the scapegoat was ;Davolee, Blaqbones or Dremo including other rappers too in his reply. Both Davolee and Dremo went on releasing diss tracks all week long replying each other on the ground of ‘Who was the best ‘.

Vector, in the heat of the moment, dropped tracks, ‘Tetracycling’ and ‘The Purge’, directly aimed at M.I. Fans went berserk, with claims and counter-claims about Vector’s bitterness towards a veteran, M.I.              However, after M.I’s response with ‘The Viper’  two weeks later, it was clearly evident to all that all was not well between the two major Nigerian rappers.

Vector responded to being tagged a snake by dropping ‘Judas the rat’ last Saturday. Many comments flew around social media. While some tagged it as a social media stunt, others felt that the long battle between both rappers was unhealthy and unnecessary.

While several people have different opinions about the many diss tracks currently being released from Nigerian rappers (A-Q dropped ‘Distractions 2’ earlier this week), it remains to be seen what growth it will bring to the ailing industry.

Canon launches ‘Discovery Week’ for artists and photographers in Lagos