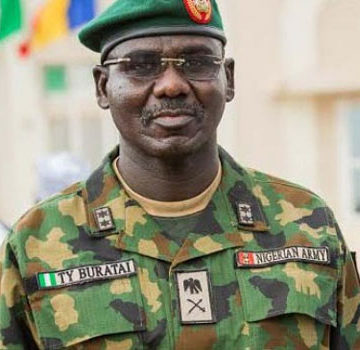 FOLLOWING the invitation issued to the Chief of Army Staff, Tukur Buratai, to appear before members of the Senate Committee on Ethics, Privileges and Public Petitions and his refusal to honour the invitation last week leading to the Senate walking out a representative of Buratai from its hearing following a petition on malicious compulsory retirement by Lt. Col. Abdulfatai Mohammed, his counsel and rights activist, Ugochukwu Osuagwu Esq. has stated that the Senate cannot summon Buratai.

Lt.Col. Mohammed had on August 12, 2016, filed a suit before the National Industrial Court against the Chief of Army Staff and Nigerian Army seeking reinstatement before taking the case to the Senate.

Osuagwu described this act as subjudice, adding that if the Senate had done due diligence it would have realized that the matter is already in court and “by Standing Rules 2015 of the Senate, matters in court are not allowed to be entertained by the Senate. Yet, the Senate went ahead, usurping the powers of the court and took up a matter of employee dismissal already before the National Industrial Court.

“It is clear that the Senate on this ground does not have the jurisdiction to hear the petition or even summon the Chief of Army Staff. The invitation by the Senate is unbecoming and a flagrant abuse of Separation of Powers under our known laws. This is also prejudicial. Powers of the Senate to invite or summon is not without limitations. The powers of the Senate to investigate are not general but limited to the execution or administration of laws enacted by the lawmakers and the disbursement and administration of money appropriated by it,” he said.

He explained further that the constitutional provisions granting oversight functions do not constitute the National Assembly as a universal ‘Ombudsman’ with the power to invite and scrutinise the conduct of every member of the public.

“The Senate’s power to summon are further circumscribed and limited by Subsection (2) of the equivalent of Section 88 of the 1999 Constitution – in that the Senate can only invite Public Servants when it wants to gather facts for the purpose of enabling it to make laws or amend existing laws. Any invitations by the legislature to any person outside the purpose defined by section 82(2) that is now 88(2) of the 1999 constitution is invalid.

“Our lawmakers should know the position of the law better and act honourably with regards to over interfering on a matter that is before the court. They, therefore, need not be so hasty with the intent to jeopardize the outcome of the matter which before and to be decided by a Court of competent jurisdiction.

“The Senate should know that the country practices a presidential system of government where Service chiefs are not accountable to the legislature. Service chiefs are appointed by the President and they are individually and collectively accountable to him whom they owe their appointments to. The Senate has the power to screen Service Chiefs after their nomination by the President but they cannot exercise any disciplinary action against them,” he said.

The lawyer concluded that the summons issued by the Chief of Army Staff to appear before the Senate over a pending court matter goes to no issue, is a waste of time and hogwash

Discos have become our challenge in power sector —Osinbajo