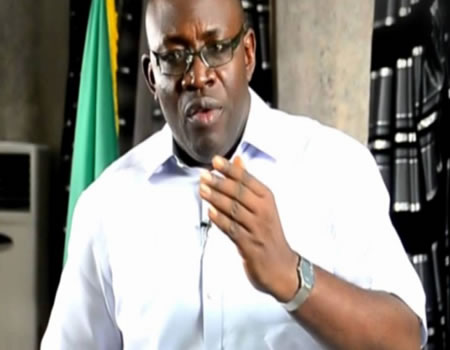 GOVERNOR Seriake Dickson of Bayelsa State has authoriSed the release of funds from the Paris Club Debt Refund to pay one and half months’ salary arrears owed workers during the peak of the biting recession in the country in 2016.

The Governor, in a bid to promote transparency called a consultative meeting of top government officials and Labour leaders and their representatives to keep them abreast with modalities of the judicious distribution of the Paris Club Fund received in December 2017.

Contained in a statement signed by the Special Adviser to the Governor on Media Relations, Mr. Fidelis Soriwei, Dickson averred that the state government received a total of N14.8 billion from the Federal Government.

According to the statement, N5.6 billion of the Fund is being spent to defray the one and a half months salary arrears out of the four and half months owed workers in the state in 2016.

Dickson explained that the outstanding salaries arrears were a balance of half salaries he paid for seven months during the recession in 2016 which came to a total of three and a half months.

The governor appreciated the work force for displaying understanding during the biting economic recession of 2016 which affected the resources of the state in an adverse way.

According to him, while most of the older states in the country have lower wage bills, Bayelsa State’s Wage Bill was over N6 billion (State and LGAs) because of the detrimental activities of some fraudulent characters.

The Governor lamented that the state was among those highest wage bill in the country in spite of its low Internally Generated Revenue base which he put at N500 million per month on the average.

He added that the recurrent burden on the state had become too high as Civil Servants in Bayelsa earn almost twice the income of their counterparts in other states of the Federation.

He explained that the government was making sustained efforts to also clean up the payroll mess to reduce the abominable wage bill.

Dickson submitted that he had always taken the issue of payment of salaries as a priority as shown by the fact that the state under his leadership did not owe workers throughout his first tenure.

The Governor also warned that he would not tolerate any complaint of inability of the Councils’ Chairmen to pay their workforce as at when due as from January, 2018.

Dickson who said that he would not fund the councils with monies from the state government urged the leadership of the councils to have a sizeable workforce that they have the capacity to manage and maintain.

According to him, the state could only come in to support the primary school education system.

“This January, I would not want to hear that Councils’ Chairmen are not able to pay salaries. I will not also augment your salaries with state money.

You are also at liberty to fire those that are not working. You employ them and you also have the power to fire them over gross misconducts and fraud’’

Dickson lamented that Bayelsa State’s Wage Bill was over N6 billion (State and LGAs) because of the detrimental activities of some fraudulent people, while older states in the country have a wage bill of N2 billion.

He lamented that the state had the highest wage bill in spite of its low Internally Generated Revenue base which he said was N500M per month on the average.

The Commissioner for Finance, Maxwell Ebibai, who was directed to give a statement of the total amount of money received from the Paris Club Fund, said that the state received a total of N14.8 billion out of which N1.37 billion was for the local governments and N13.5 billion for the states government.

Ebibai, reiterated that N5.6 billion of the Fund is being spent to pay the one and a half months salary arrears owed workers in the state.