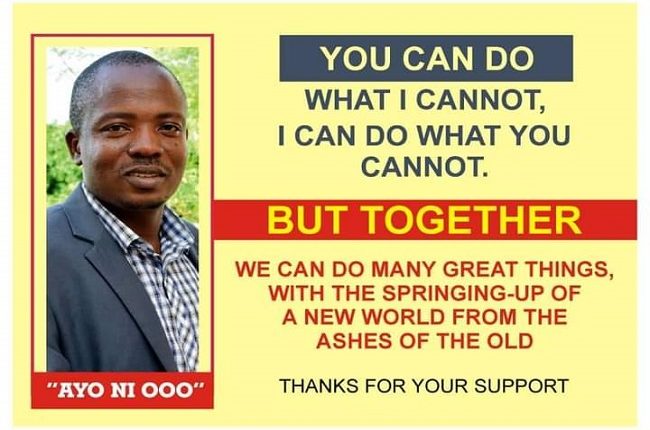 Despite a restraining injunction of the National Industrial Court, Lagos judicial division, Mr Ayo Adeogun has been elected Chairman of the Oyo state chapter of the Nigerian Union of Local Government Employees (NULGE).

Justice N.C.S. Ogbuanya had last Friday given the order because of the unlawful and unexplained exclusion of one of the presidential candidates, Hakeem Oyewo pending the hearing and determination of the motion on notice for interlocutory injunction filed contemporaneously.

The order of injunction restrained the entire state members of the caretaker committee of the Oyo state chapter of NULGE and the national headquarters of the association from conducting elections into various executive offices, pending further hearing of the case scheduled to hold today (Wednesday).

Notwithstanding the restraining order, Adeogun emerged President at a state delegates conference held at Nigeria Union of Journalists (NUJ) press centre, Ibadan, between the hours of 1am and 6am, on Tuesday.

The Mr Rufus Babalola led caretaker committee of Oyo NULGE superintended the congress which had congress which was attended by select delegates across local government areas of the state.

When Nigerian Tribune called Babalola to ask why the election was conducted despite a restraining order, he said, “I am in a meeting”.

While the newly elected Chairman, Adeogun appreciated Tribune Online for congratulating him, he responded with, “thank you very much” when asked whether he was the only candidate that stood in for the election and asked to give names of other members of the executive council that emerged alongside him.

The Oyo NULGE crisis dates back to November 6, 2019, when the biennial delegates’ conference convened in Saki, to elect new members of the state executive council of the union, turned out inconclusive.

The election was aborted just before votes were counted when the electoral committee was informed of an injunction from the National Industrial Court, Ibadan, restraining the conduct of the election.

At that aborted election, Mr Hakeem Oyewo, Mr Abass Bogunmbe and Mrs Romoke Opabunmi, all Ibadan indigenes, were candidates for the position of President.

The newly elected President, Mr Ayobami Adeogun, who is Chairman, Ibadan/Ibarapa Forum, of Oyo NULGE, was reported to have emerged as candidate after the aborted congress.

Overtime, some NULGE members have viewed Adeogun as an anointed candidate and imposition on the union by the powers that be.

Since May 19, 2020 that Mr Bayo Titilola-Sodo left office as the union’s President, the vacuum left has remained with the appointed caretaker committee unable to fix a date and venue for the election owing to the festering crisis.

I am not under US surveillance ― Atiku