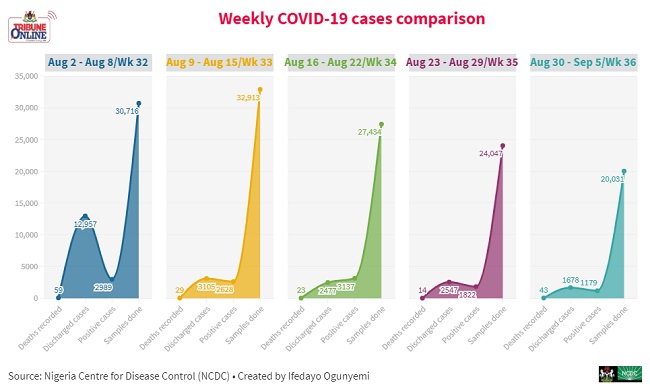 In spite of the low infections recorded for the second week in a row, at least 43 persons died of COVID-19 complications last week, Tribune Online reports.

This is a sharp contrast to the 14 persons who died the penultimate week.

For four weeks, the weekly figure has been fluctuating. In the first week of August, the cases reduced, followed by a week of increase and two weeks of reduction.

In the last four months, the lowest daily figure of confirmed cases (125) was reported on September 3, 2020.

The Presidential Task Force on COVID-19 explained that the recent reduction in the cases does not mean the country has passed the peak of the pandemic but it is as a result of low testing and collection of samples recorded in some states.

Data from the Nigeria Centre for Disease Control (NCDC) showed that 20,031 tests were conducted last week while 24,047 samples were tested the previous week which shows there is a reduction. 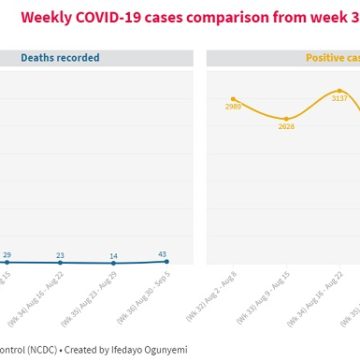 A total of 1,678 people recovered from the virus and were discharged last week compared to the 2,547 persons discharged in the previous week which shows there is a reduction.

Also, 43 deaths were reported last week compared to the 14 deaths of the previous week.

The Chairman of the Presidential Task Force, Boss Mustapha, urged caution and vigilance on the declining numbers as he noted that the virus is still potent and very dangerous.

“This position is informed by the fact in spite of our enhanced testing capacity, the numbers of samples collected for testing have not been encouraging, while we intensify our targeted testing strategy, we still urge the states to expand the scope of their sample collection,” he said.

On Sunday, 138 new cases of COVID-19 were reported in the country, bringing the total number of confirmed cases to 53,865.

On Monday, 143 new cases of the pandemic were reported in the country, taking the total to 54,008.

On Wednesday, 216 new cases of COVID-19 were reported in the country.

On Thursday, 125 new cases were reported in Nigeria.

On Friday, 156 new cases of the pandemic were recorded. 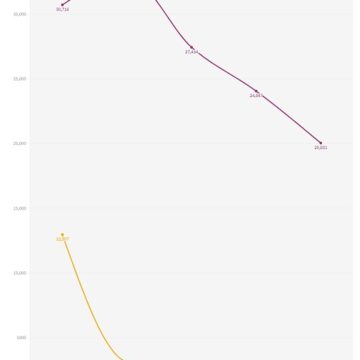 So far, 54,905 cases have been confirmed, 42,922 cases have been discharged 1054 deaths have been recorded in 36 states and the Federal Capital Territory. Currently, there are only 10,929 active cases in Nigeria.