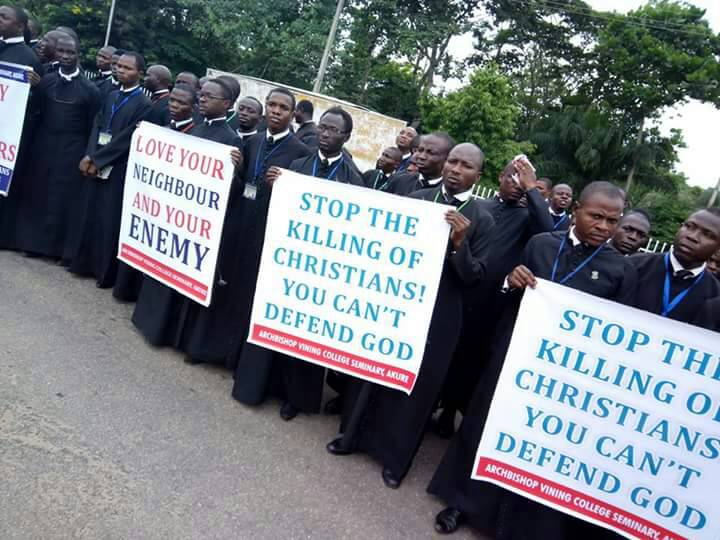 The deployment of police patrol  on the major roads and streets of Makurdi may not be unconnected with the protest ordered by the national body of Christina Association of Nigeria, CAN over the spars of killings in the country, particularly, Benue state where two Catholic priests and 17 parishioners were gruesomely killed by herdsmen militia last Tuesday.

Also was the air surveillance by police chopper between 9.00am and 11. 30 am, all signals of security against any break down of law and order in the state capital.

The spokesman of the state command, ASP,  Moses Yamu could not be reached by phone to ascertain the reason for the deployment of air and land patrol by the police.

Despite the tight security, most churches however in Makurdi observed the protest within their church premises on Sunday as well as putting on black attire as directed by the state  CAN chairman, Rev. Akpen Leva.

Some of the churches visited were; Holy Ghost Catholic Church, Wadata, NKST church at High Level and Idye where Worshippers dressed in black attire.

Among the inscription on their placards were ;  ” Buhari is a murderer”,”Buhari is responsible for the killings in Benue, ” FG must come out to defend us”, ‘‘Enough of Bloodshed in Nigeria’’, ‘‘Enough of Unlawful Killings in the Country’’, “FG, Stop Herdsmen Killings’’ among others.

At NKST Church Iyorter along Makurdi-Gboko road, the entire Worshippers were putting on black attires, prayed and laid curses on the killer’s herdsmen in Benue asking God to visit them and scatter their plans against Benue people.

Speaking to newsmen in the church premises, Associate Pastor, Rev. Samuel Tergwua Ackaudu, said they had decided to embark on the peaceful protest within the church to tell Nigerians and the whole world that there is total darkness in Benue and that God is angry with president Buhari.

“In Benue state, we have realized that our lives are no longer valuables, adding, ‘now it has come to a stage that it’s better to be a cow than to be a human being under Buhari, he should stand up to his responsibility by protecting the lives and property of our state and Nigeria”.

However, the seven days prayer and fasting directed by the state CAN is commencing today, (Monday) for peace to reign in the state and the entire nation, Nigeria.