Despite government announcement of a 24-hour curfew in Ilorin, the Kwara State capital on Friday night, residents still trooped to Kwara Shopping Mall to loot property on Saturday morning.

It is recalled that Governor Abdulrahman Abdulrazaq at about 11:30 am on Friday had declared the curfew following youth restiveness and unrestrained looting of public and private properties in the state capital as a way of restoring calmness and sanity back to the society. 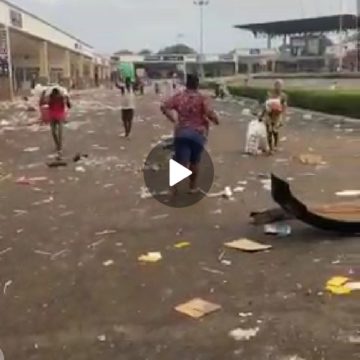 The people also attacked banks and phone shops located inside the mall as they gained entry through borough walls.

It was also reported that one of the hoodlums was shot dead by security operatives drafted to restore normalcy to the place and nearby areas.

The governor had made the announcement on the curfew after a security meeting held with all the head of security agencies in the state, saying that; “Our observation is that what has happened so far today was not a protest. It cannot be defended under any guise.

“It was a pure act of criminality. Some persons are hiding under the nationwide tension to commit crimes.

“Lives are being threatened. Businesses are being looted. Public properties have been targeted. This is unacceptable. It is not who we are.

“To curb these acts of criminalities, I hereby declare a 24-hour curfew in Ilorin metropolis from midnight today October 23rd, 2020. This is in line with Sections 1, 2 and 4 of the Public Order Act Chapter 382 Laws of Federation of Nigeria 2004”

“People are urged to stay indoors in compliance with this curfew. This will be reviewed as we watch developments.

“While the curfew is on, security forces have been placed on the alert to maintain strict compliance. I urge citizens to comply with this declaration which is meant to protect lives and properties.

“Finally, we apologise to our people and businesses that have been badly hurt. I urge them to be calm while we stop the criminality now.”