‘Despite cervical treatment, I gave birth to twins’ 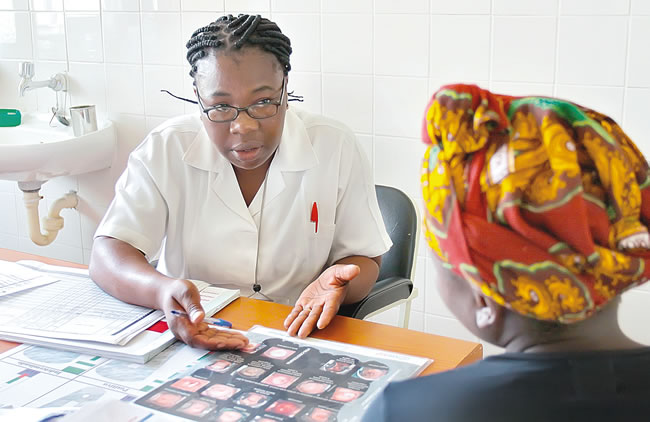 Mrs Yinka Adesina, a newly-wedded lady never expected that she would need to get treated for abnormalities in her cervix, the entrance of her woman’s womb, to prevent future development of cervical cancer.

The doctor explained that she would require undergoing cryotherapy, a simple procedure to kill abnormal cells in the entrance of her womb.  To ensure that the cervix heals well, after the treatment, she needed to abstain from sex for at least a month.

“Emotionally, I did not find it funny. The most terrible aspect of it was the “no sex for a month” though I just got married. After the treatment, I had to bear the heavy virginal discharge, including the accompanying odour,” Mrs Adesina, a 43 –year-old animal health technologist, recounted.

Mrs Adesina’s resolution to overcome the problem and her husband’s support pulled her through. Despite the setback, two years into the marriage, she gave birth to a set of twins, who are now 15 years-old. She had continued to have a yearly pap smear to be sure that her cervix remains healthy.

In Nigeria, cervical cancer is the second most common cancer in the country and in women, where it accounts for 21 per cent of all female malignancies in 2018, with estimated new cases of 14,943 according to the Global Cancer Observatory Population and Cancer fact sheets.

In Lagos, researchers put awareness and uptake of cervical cancer screening among women at 41.4% and 18.4%, respectively. It was at the Randle General Hospital, Lagos, Nigeria, between January 1, 2015, and March 30, 2015. It was in the 2020 edition of the Nigerian Journal of General Practitioners.

Others include discouragement by a spouse, fear of being diagnosed with cervical cancer, lack of adequate information, belief that ‘‘I cannot develop cervical cancer,’’ fear of the procedure, and indecision about doing a screening test.

Dr Olufemi Adesanya, a consultant obstetric and gynaecologist, said that it is a misconception that any abnormal screening result tantamount to the diagnosis of invasive cervical. Poor understanding of the process of the development of cervical cancer had caused this misconception in the community.

The expert, however, said positive support from family and friends can play an important role in facilitating the uptake of cervical cancer screening, particularly important in the African culture, where values are placed on close social and family relationships. Advice from such relationships can either positively or negatively influence the decision to undergo cervical cancer screening.

According to him, “Women’s perception about their susceptibility to develop cervical cancer has been shown to be an important factor that either motivates or hinders the likelihood of cervical screening uptake.”

Unfortunately, Chairperson, Collation against Cancer in Oyo State, Dr Omolara Olusola-Taiwo at  the 2020 World Cancer day in Ibadan stated that cases of breast and cervical cancer were on the rise because “the health-seeking behaviour in Africa and Nigeria particularly is very poor. That is why we are here to tell them to examine their breast every month and go for regular cervical cancer screening.”

Nonetheless, Dr Funmi Salami, the Special Advisor to Governor Seyi Makinde on health, at the screening exercise for over 1000 women for breast and cervical cancer in commemorating the 2021 world Cancer day in Ibadan by the health ministry in collaboration with Oyo state Coalition against Cancer assured that the treatment for cervical cancer, when it is detected early, is relatively inexpensive and can safe life.