Despite being CBN governor’s son, I rode in Danfo and Molue —Isong 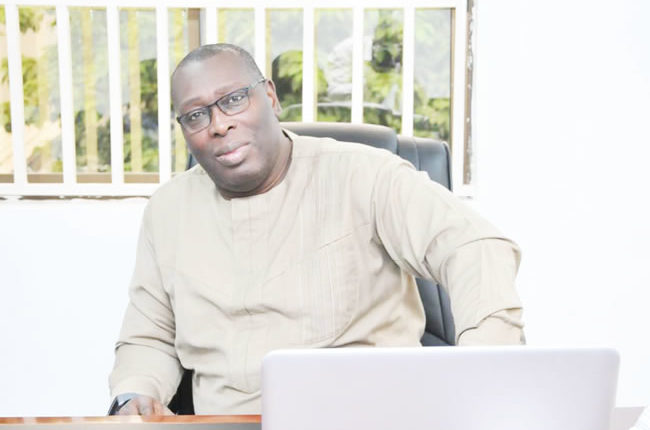 Clement Isong Junior is the first son of the Governor of Central Bank of Nigeria, Clement Isong, during the military regime of General Yakubu Gowon. He is currently the Chief Executive Officer, Major Oil Marketers
Association of Nigeria (MOMAN). In this interview by SEGUN KASALI, he shares his growing up experiences.

Growing up, were you ever treated specially being the CBN governor’s son?

No, not at all. That my father was a big man didn’t change anything. I was not different from every other child. The school did not treat me differently and there was nothing like big man’s child as of that time. Everybody knows my father was a disciplinarian and it was not just to his children but also to the whole country. He believed that Nigeria had to spend money wisely. That was how I was raised. I used to go to school by bus. In fact, I would go to school by Danfo and Molue despite the fact that my father was the governor of the apex bank. We were not different from every other Nigerian. I went to a public school – King’s College. But it was not strange then because the children of other big men had the same experience. It is a recent phenomenon that the children of big men drive big cars. That wasn’t the case in those days. Then, my life was pretty normal and I grew up in a strict environment. My father started out as a teacher. He taught at primary, secondary and tertiary levels. He was a lecturer at the University of Ibadan before he became the Governor of Central Bank. He put himself through school. He went to a top university. He was an economist. He belonged to the school of economists that you must cut your coat according to your cloth. That is how we grew up. He believed in savings. So, he never spoilt us with money despite being the CBN Governor.

So, you were fearful of your dad?

Exactly, it was just fear. It was from him I learnt that you do not need to beat your children but lead by example. Children watch and imitate their parents. There was no comfortability in the way he treated us because I went to King’s College just like every other ‘privileged’ child and we all had the same experience. We all wore the same school uniform and shoes. However, my dad did not use the stick.

But your mom did?

Yes, she did. My mother used to beat. I went through multiplication table with her and got slaps if I made any mistake. I think whoever has the two of them in their lives will be advantaged and I was fortunate to have them from childhood to adulthood. If anything that happened to me at my workplace, I would call my father first, not even my wife. If I was promoted, I would call him first. If I lost to somebody else, I would call my father first. This is because he would listen to me and advise me from his wealth of wisdom. Even on issues that provoked tears, he was the first I would head to. He knew how to encourage not only myself and my siblings but also many people he was mentoring. People like Senator Biyi Durojaiye could testify to this. My mum has always been there too. I discuss my life with her too even when I was at King’s College.

What are your fond memories of King’s College?

I remember when we were in the Biology lab studying and I was told to pick up a frog but I couldn’t. As a result, I was given six strokes of the cane. I also remember that I performed poorly from Form One to Upper Six.

And you went home with those poor results knowing a disciplinarian father was waiting?

Well, I always came second to the last while the last would have to repeat a year. So, I sailed through. It was terrible taking those bad results home. My father was always unhappy with me. So, I braced myself for my A’levels and I emerged the best student.

How did you manage to turn things around?

It was just effort. I sat down and read up my books from cover to cover. The times I didn’t do well, I was unserious. There were other things distracting me. I was into games, playing football and looking at girls.

When did your dad’s disciplined lifestyle start to have effect on you?

The discipline kicked in when I started working. As a lawyer, I would go for a whole weekend trying to prepare for my papers. I should also mention that it was my dad who suggested I study Law, not my decision per se.

And you have never regretted following that suggestion?

Not in the slightest. Particularly, my dad’s training started to manifest and helped me to climb to the peak of my career. If you want to succeed, discipline is key. However, I was still unserious, despite that I had finished Law School and worked at so many places.

I was unserious because I was still chasing girls. From there, there was a coup and my father went to jail. That was the time politicians all over the country were being jailed. So, I went home to look after my mother and siblings. I moved my father around a lot, from Kirikiri to Jos prison and others. So, as the first son and man of the house, I had to grow up.

How was the learning curve?

I had to make sure he took his drugs and from Calabar, we would drive to Jos every weekend to look after him. He was in jail for several months. It was tough because we were poor and never lived rich. We had nothing. That was when I started working for the government in Cross River State, as a state counsel. It was a time to embrace responsibility and I became the decision maker. The incident brought out my resilience. To me, the most important thing then was my mother, siblings and the cousins that my father was catering for.

Life must have been really hard then.

It was really hard. But, like I said, we were never ostentatious. I won’t say that we went borrowing but farmed, sold yam and plantain. Alongside, my mum and I were working as civil servants.

You met your wife amidst the struggles?

I met my wife at my mother’s office. She came with her mother to my mother’s office. I saw that she was really pretty and approached her later. When I was posted to Ikot-Ekpene, my father had been discharged from prison at that time and I was the head of the Ministry of Justice at Ikot-Ekpene. She was a student studying Law. We became friends and started dating.

The problem with Nigeria’s leadership—Al-Mustapha