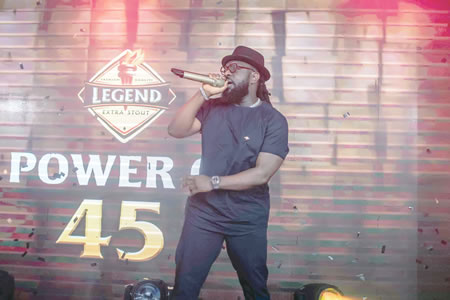 Hundreds of consumers got the opportunity to, last Friday night, turn up with some of Nigeria’s biggest entertainers like Desmond Elliot, Timaya, Funnybone, Mawuli Gavor,  and Chike. This was courtesy of Legend Extra Stout who hosted the consumers to a special celebratory event which marked the launch of its new 45cl product size. Radisson Blu, Ikeja was filled to the brim with hundreds of fans who trooped in to celebrate with the landmark achievement.

Timaya has been having a memorable year and he continued his impressive streak by delighting the audience with some of his classics such as ‘Ogologomma, ‘Ukwu’ as well as some of his new hits like ‘I can’t kill myself’ and ‘Balance’. Fans were screaming at the top of their lungs during his performance, it really was a sight to behold.

Just when consumers thought the party couldn’t get any better, Project Fame’s Chike mounted the stage and they simply could not believe their eyes. He also performed a number of his hit songs like ‘Fancy you’, ‘Friend zone’ and ‘Out of love’.

The DJ on the night also got the fans buzzing as he delivered chart-topping hits which had everyone dancing and singing along. This was as good as any Friday night turn up and Legend Extra Stout literally shut down Ikeja, as it launched it’s all new product size.

This product launch adds to Legend’s long list of exciting brand initiatives in 2019. Earlier in the year, Legend Extra Stout set out to to redefine itself, and broaden its appeal to millenial Nigerians. What followed were a set of audio-visual commercials emphasising Legend’s new brand narrative of ‘Be Yourself’. The simple, yet brilliant campaign has seen the brand reinvent itself in aN interesting way, as it encouraged consumers to be proud of their uniqueness, rather than conform to societal norms. Legend Extra Stout clearly seems to be on a hot streak, and with nights like these we are certainly up for more exciting initiatives from the stout brand.