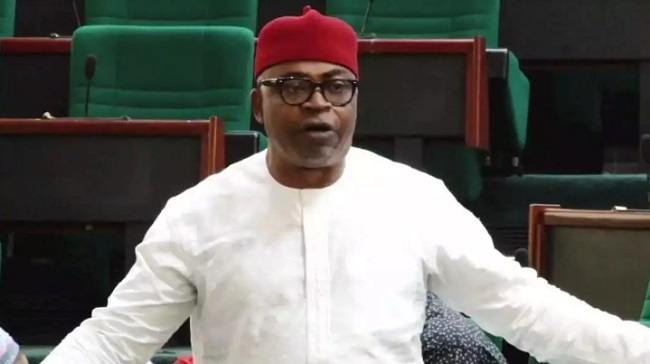 Deputy Minority Leader of the House of Representatives, Hon. Toby Okechukwu has enjoined Nigerian leaders to tow the path of justice, equity, dialogue, and rule of law in order to arrest worsening insecurity and separatist agitations across the country.

Okechukwu said the nation was clearly in a state of anomie and dysfunction, although there were still opportunities to preserve the nation’s democracy and reconstruct the union to a more workable piece.

He reminded the nation that June 12 was designated Democracy Day in honour of a symbol of the nation’s democratic struggles, the late Chief MKO Abiola, who was unjustly denied the opportunity to exercise an overwhelmingly popular mandate handed him by the Nigerian people on June 12 1993, but only to be celebrated at death.

“The greatest debt the governments and leaders of Nigeria owe every part of this country and every Nigerian is a sense of justice and equity according to the letters and spirit of our constitution while alive, not posthumously as in the case of Chief MKO Abiola.

“The golden rule of justice is to do unto others as you would have them do unto you. Sadly, the root of the restiveness and insecurity across the country are inequity, repression, injustice, including economic injustice, flagrant disregard for the rule of law and well spelt out provisions of the Constitution for proper management of our diversity. It is the excessive use of force where dialogue and empathy can clearly address issues.

“Therefore, it is incumbent on the Federal Government to take conscious steps to do those things that promote national unity and earns it loyalty. Our leaders should be proactive in creating a clement environment for peace to reign to arrest the present security malaise and restiveness, and near state of anarchy.

“Engagement and dialogue, which are very veritable strategic tools for peace should be activated.

“The old-fashionable and lazy approach of scape-goating and threatening individuals and ethnic groups as a basis for settling Nigerian problems cannot suffice at this time. It only mutates monstrously and further acerbates our problems”, he stated.

The lawmaker, who represents the Aninri/Awgu/Oji River Federal Constituency in Enugu State charged elders and elected leaders to “acknowledge that they were elected to solve our problems and not to compound them by their attitudes, policies, and utterances.

“It is inelegant and does no public good to forget what our problems are and act or speak in a way that further divides us, only to end up blaming one another.

“It should be the desire and aspiration of every elected leader in this country today to douse the tension, and to dialogue to find common grounds to solve our security challenges.

“The Igagan debacle, the invasion of the Nuhu Bamali Polytechnic in Zaria, Kaduna State a few days ago, the recent killing of 88 citizens in one fell swoop in Kebbi State, the killings in the South East and rampant destruction of security infrastructure in the region, and the interminable banditry and killings in the Middle Belt region are self-evident facts that the present insecurity has no particular colour, character, and content of an ethnic group.

“Never in our history has insecurity been so widespread that the entire nation is engulfed as we have it today, hence the need for a common ground and dialogue to solve the problems because if we don’t deal with insecurity, insecurity will continue to deal with us.”

Okechukwu commended the leaders of the South East and the Federal Government for the Friday, June 11, dialogue in Enugu to de-escalate tension in the region, noting that it was a right step that should be sustained and replicated nationwide.

He wished Nigerians a happy Democracy Day, reiterating, however, that “we should be good students of history to ensure that the M.KO Abiola scenario, the June 12 situation should never happen again.”

In spite of the huge investment in the water sector by the government and international organisations, water scarcity has grown to become a perennial nightmare for residents of Abeokuta, the Ogun State capital. This report x-rays the lives and experiences of residents in getting clean, potable and affordable water amidst the surge of COVID-19 cases in the state…The June 12 scenario  The June 12 scenario

The Lagos-Ibadan railway was inaugurated recently for a full paid operation by the Nigerian Railway Corporation after about a year of free test-run. Our reporter joined the train to and fro Lagos from Ibadan and tells his experience in this report…The June 12 scenario  The June 12 scenario

Be unrelenting in praying for nation’s leadership ― Alaafin urges Nigerians