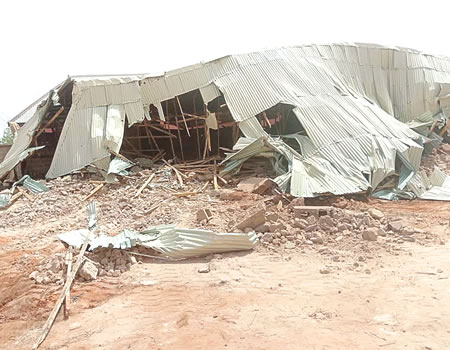 The Christian Association of Nigeria (CAN), Kebbi State chapter, has condemned in strong terms the demolition of the corpers’ lodge of a parish of the Redeemed Christian Church of God in Kalgo town, headquarters of Kalgo Local Government area of the state.

A three-page petition letter addressed to the Director of the Department of State Security Services (DSS), signed by the chairman and Secretary of CAN, Venerable (Dr.) Ayuba Kanta and Mr Samuel Adda and made available to ChurchNews, described the demolition of the church building as gross violation of Christian worshipers’ right and a breach of the 1999 Constitution of the Federal Republic of Nigeria as amended.

The petition which was captioned ‘Demolition of Redeemed Christian Church (RCCG) corpers’ lodge for Purported Breach of Building/ Development Permit,’ explained that CAN could deduce that the corpers’ lodge under construction was demolished on the premise of a building without formal approval, violation of building plan and the use of the premises for religious activities.

It added that CAN observed with concern and serious exception to “illegal operation of church services”, content in one of Kebbi Urban Development Authority (KUDA)’s letter dated 17th March, 2020, noting that while CAN cannot be party to any disobedience to any constituted authority,  it still considered KUDA’s action which it claimed to be a directive of Kalgo Local Council as precipitatious.

The Christian body also expressed that as it is not out for any confrontation with any constituted authority and believes in dialogue therefore observed that there should be no reason why there should be no church or church services in Kalgo town, especially now that it has become a university town housing the Federal University, Birnin-Kebbi.

The body therefore requested that the Kalgo Local Government Council and the Kebbi Urban Development Authority rebuild the structure demolished, grant the RCCG and other Christian churches separate lands for the building of churches, schools and clinics from residential building and to allow churches that have purchased lands for agricultural, residential purposes to build churches clinics and schools.

In a related development, Venerable Kanta, in a chat with ChurchNews, expressed worries that leaders who took oath of office to protect the constitution of Nigeria turned out to jettison same by allowing their personal interest to override constitutional provisions.

He reiterated that Christians are not second-hand citizens in their own country, pointing out that freedom of religious worship is not even a constitutional provision but a divine provision.

“If God wants the entire human race to belong to a single religious faith, He would not need any human assistance to do it. Religious freedom is a God-given right to humans to seek Him in the best way that appeals to them individually or group of people,” he affirmed.

How not to fast: Doctors, clerics, traditionalists speak on dangers of marathon fast