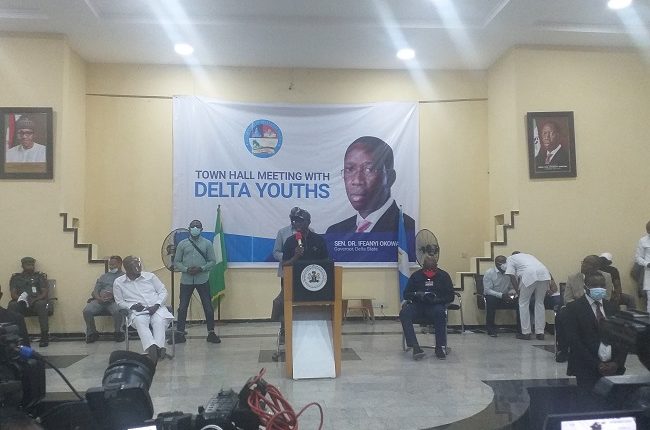 Demands for resource control in a restructured federation got a boost on Thursday as the Delta State governor, Senator Ifeanyi Okowa, held a town hall meeting with youths of the state at Government House Annex in Warri.

The meeting was held at the instance of the governor and massively attended by #EndSARS youths protesters across the state as well as Deputy Governor Kingsley Otuaro, commissioners and other government officials.

The youths were drawn from student union leaders, human right activists as well as representatives of the major ethnic nationalities in the state: Urhobo, Itsekiri, Ijaw and the Isoko.

They harped on evolving a new Nigeria devoid of police brutality, oppression, corruption, nepotism, ethnic profiling and other anti-growth tendencies of leaders in the country.

Representatives of the youths were given ample opportunities to reel out their grievances and complaints against the system before the governor, who was calm to listen to them.

Topmost on the list of demands by the youth agitators at the town hall meeting, which lasted five hours amid heavy security presence, was the call for a newly restructured constitution for Nigeria with emphasis on resource control for each state in a new federation.

They also demanded electoral reforms and review of the cost of governance in the country and urgent rehabilitation of all failed inter-state roads in Delta State through contract awards to credible contractors.

Leader of the New Nigeria Movement Stakeholders (NNMS), Ughelli North Local Government, Comrade Blezzed Ughere, while addressing the governor, reiterated that “the #EndSARS protest is not just over police brutality, but the general state of dilapidation in the national polity.”

The Itsekiri ethnic group, in their presentation, called for the urgent revival of the four moribund seaports in Delta State in Warri, Sapele, Koko and Burutu, to further boost employment in the state.

They also urged the government to beef up security across the state to combat the unrestricted influx of killer herdsmen who have been terrorising farmers, women and children in the state.

The Ijaw ethnic group representative demanded the construction of shoreline protection in the riverine and coastal communities across the state to prevent such communities from being washed away by flood and ocean surge.

Meanwhile, Governor Ifeanyi Okowa, while responding, assured that his administration would make governance closer to the masses than ever before through consultation and collaboration.

He promised that the government would strive to proffer urgent solutions to the nagging issue of youth unemployment even though all eligible Delta youths cannot get employed in the civil service.

He, however, stated that his administration would continue to roll out policies that would guarantee enduring working environment as well as vocational and ICTs skill acquisition training programmes.

He also disclosed that the state government will soon set up a human rights committee involving youths that’ll receive and tackle complaints about human rights abuses and extra-judicial killings by overzealous security operatives.