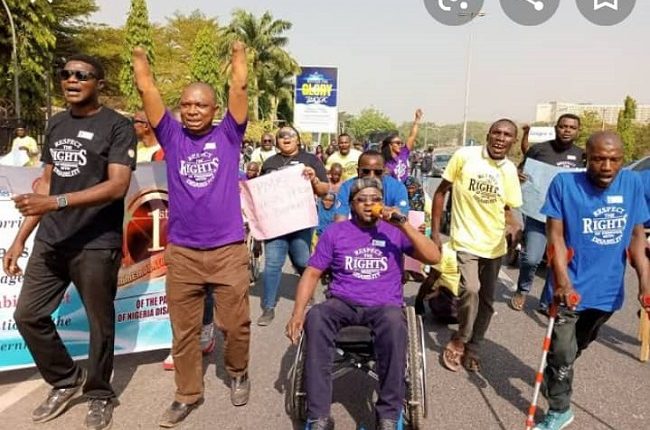 Aspirants for various elective positions under the People’s Democratic Party (PDP), in Ughelli North Local Government Area of Delta State, on Friday, staged a peaceful protest and threatened to head to the court over alleged plan to impose candidates on the electorate.

The state electoral body, it will be recalled, slated the local government election for March 6, 2021, while the PDP has chosen December 21 for its primary.

The protesters, who barricaded the entrance of PDP’s secretariat, were armed with placards bearing different
inscriptions, such as “No primary election, No general election,” “Local government is for the youths and the youths should be allowed to determine who to be their chairman,” “PDP is our party, we need a free and fair election, Ughelli North leaders take note,” and “Gov. Okowa please allow chairmanship candidates to go for primary in Ughelli North for peace to reign,” among others.
One of the chairmanship aspirants for Ughelli North Local Government Area in the forthcoming election, Mr Richard Ovweghrederohwo, during the protest, threatened to take the leaders of the PDP to court if they imposed candidates on the people.

Speaking during the protest, Mr Ovweghrederohwo, who’s the Managing Director of Aduvie Motors, told newsmen that in 2017, he ran for the chairmanship position of the council at the primary, but the party leaders in Ughelli North said that Governor Ifeanyi Okowa had asked him to back out of the race for the incumbent chairman, Hon. Godwin Adode.

He said, “as a loyal party faithful, I obeyed and this is how he was imposed on the good people of Ughelli North.”

While condemning the plans of the leaders of the party in Ughelli North to, again, impose a candidate on the electorate, he said it would not be accepted and would be highly resisted.

He called on the state governor and state chairman of PDP to call the leaders of the party in Ughelli North Local Government Area to order before hell is let loose.

Also speaking during the street protest in Ughelli, the immediate past PDP Youths leader of the council, Comrade Felix Olokpa, harped on free and fair primary and a level playing ground for all the aspirants.

According to him, the low votes recorded in the previous elections in the council area was as a result of grievances from the imposition of candidates by the leaders of the party against the general will of the people.

The British Parliament at the Westminster Hall held a debate on ‘e-petition 554150, relating to Nigeria and the sanctions regime’ on Monday. The government of the United Kingdom has however responded…Delta LG election  Delta LG election

The surprise visit made on Friday night by the leaders of the ruling All Progressives Congress (APC) to former President Goodluck Jonathan at his residence in Abuja triggered a stir in the major political camps, resulting in at least four possible theories..Delta LG election  Delta LG election