The Deputy President of the Senate, Senator Ovie Omo-Agege has declared Delta State ripe for harvest by the All Progressives Congress (APC), come 2023 general elections.

Omo-Agege made the declaration during a visit to the founding leader of the APC in Delta State, Olorogun O’tega Emerhor, at hisEvwreni country-home, Ughelli North Local Government Area of the state.

To take over the state for APC come 2023, Omo-Agege called for an end to the tendencies in the party, urging leaders of the party to close ranks and work for the unity of the party to win future elections.

“Delta State is ripe for the taking. We have also said that can only happen if all of us are on the same page. Come to think of it, what are we fighting for?

“At the end of the day, we are brothers first before we became members of APC. Party will come and go but the Urhobo people will remain Urhobo. Delta State will remain Delta State. 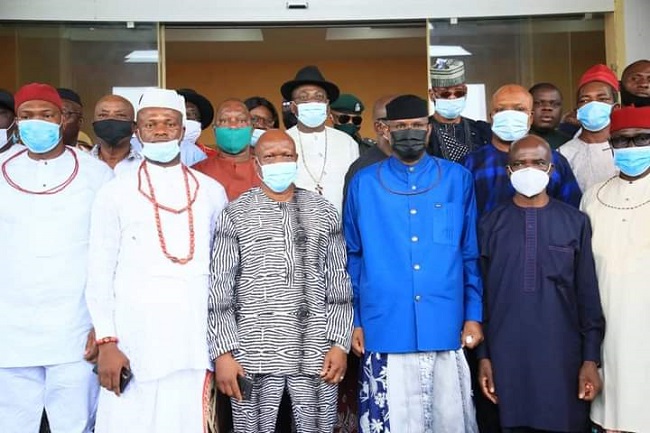 “Action Group and the rest of them have come and gone but our people remain the same. It’s time to emphasis more on what unites us than what divides us. That’s the only way we can win elections. We have decided that we put all our differences aside.

“We already have that understanding but it’s important that those who follow us, those who sympathise with us and those who share in our aspirations, it’s good they also see that. That’s the reason we at this event.

“As from today, we should all know that we are one. The party is not just about Olorogun Emerhor and myself, we still have other leaders. In politics, we drag who gets what, but while doing that, we must do it with civility.

“We must do it with humanity. We must not play it in a way that it becomes almost impossible to reconcile yourselves at the end of the exercise,” Omo-Agege pleaded while commending Olorogun Emerhor for committing to the peace process in the state,

In his remark, Emerhor, who was the 2015 governorship candidate of the party, described the visit by Omo-Agege as historic, saying it was time for leaders and members of the party from across the state to embrace peace and unite in the interest of the party.

“I believe that unity is our only winning formula against the PDP in the next election, divided we fall, united, we stand.

“That is why I have continued to preach it and I am happy that that is what Senator Omo-Agege has come to demonstrate here today, by putting aside any differences we may have.

“The second aspect of winning Delta State is the issue of leadership. There must be a leader of the party. We have many leaders but somebody must be the head who organises the others to work together so that the ‘Oshobey’ can work. There cannot be many captains in a ship. Too many cooks spoil the broth.

“Senator Ovie Omo-Agege, God has made you a king in Delta State APC, that cannot be disputed. Nonetheless, you are here today to respect your senior brother.

“If we are to win, we must have a leader, and that role, it is you, Senator Ovie Omo-Agege that can play it now. It is very clear, all of us who are leaders in the state today, if we lead a delegation to Abuja who will they acknowledged first, it is him, will anyone be contesting that at such a meeting?” he queried rhetorically.

Emerhor, therefore, urged Omo-Agege to take responsibility by reaching out to other APC leaders such as Chief Great Ogboru, Festus Keyamo, SAN and others and bring them together for the success of the party.