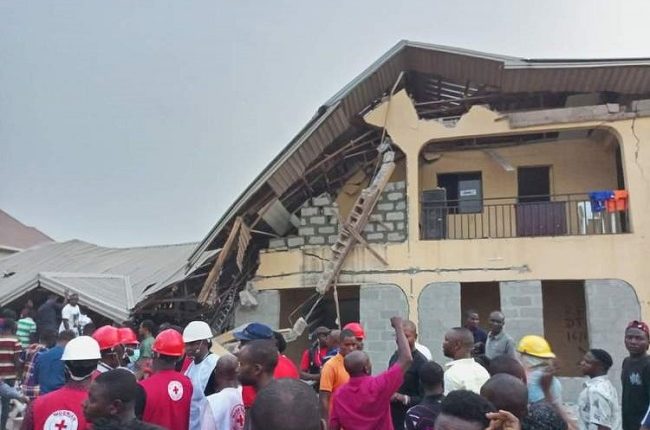 A panel of inquiry has been set up by the Delta State government to investigate the immediate causes of the collapse of the building housing Salvation ministries in Okpanam near Asaba on Tuesday.

Four persons have so far died while others are recuperating at various health facilities including Asaba specialist hospital and the federal medical centre in the state capital.

The Delta State deputy governor, Deacon Kingsley Otuaro who disclosed this after inspecting the building and visiting the injured at Asaba Specialist hospital said, in no distant time, the report of the panel would be available adding that those culpable will face the laws.

According to him, reports from the medical personnel were very heartwarming and encouraging adding that “from what I saw, the patients are responding well and we hope that in no distant time, so many of them will be discharged.”

On the bills of the victims, the deputy governor disclosed that the state government would be an integral part of all that has happened.

“We are going to do all in our powers, in ensuring that all is well with the respective families.”

“I want to thank God for the coordinated responses of the various Ministries, Departments and Agencies, in the rescue operation, such that we are able to have so many alive, with a minimal casualty as it were.

“We are assuring Deltans and everyone that the report of this particular incident would be made public when it finally comes out.

“We have, unfortunately, recorded four losses and as I said, it could have been worse.”

Meanwhile, a survivor, Mrs Chidinma Ugochukwu who had a seven months old baby on her back and another three years old narrated her experiences saying:

“After the preaching by the man of God and it was time for Holy Communion, the man of God, Pastor David told us that the people with critical conditions, those with sicknesses like diabetes, HIV, cancer, that it is not for everybody.

“We were there listening, then all of a sudden, we discovered that there was a great noise not allowing anybody to escape.

“It was like magic, what we saw was that everybody was just going down. I was backing my small baby, the elder one was in the children department.

“After the incident, so many people came to rescue us. I was there trying to bring this child out of my back. One man said I should give him the baby which I did and I started looking for the elder brother and I later saw him alive.

“So many people were affected, we just blessed God. Our bags, our phones, even our footwear went down just like that but we are alive.

“So many people survived it and I thank God for the government of Delta State because immediately it happened, all of them came, fire service, ambulance, everywhere filled as they tried to rescue people.