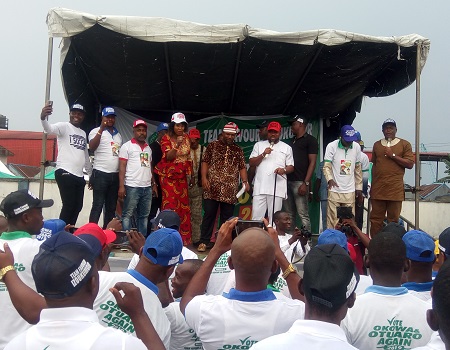 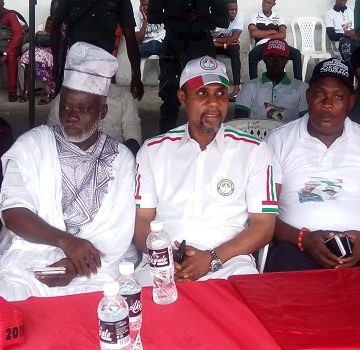 NON-INDIGENES resident in Delta Stathasve vowed to mobilise their members to support the re-election of incumbent Governor Ifeanyi Okowa come 2019.

The non-indigenes made the vow at the inauguration of Team Favour Izokuomor for Okowa/Otuaro 2019 on Sunday in Warri, Delta State.

Members of the non-indigenes, who were led by their traditional and political leaders making up the team, comprised Yoruba, Hausa, Nupe, Igbo and Edo at the inauguration in their numbers.

Commissioner Representing the Ijaw ethnic nationality in the Board of DESOPADEC, Chief Favour Izoukumor, marvelled at the mammoth gathering in branded T-shirts, saying “it is a blessing to see Nigerians from the North, West and East gathered here in unison for a common purpose and goal.”

According to him, “The state doesn’t need a governor who would railroad it into the bleak past of hanging on the brink of a collapsing economy, unrest and ethnic disunity.

“It is right and just for a man who has gallantly dragged us from the cliff edge to prosperity and is rebuilding our infrastructure to be commended and given more opportunity to continue what he is doing,” he asserted while urging the gathering to remain focused.

Chairman of leaders of all the non-indigenes and Team Favour in Warri, Elder Owolabi Abiodun Sunday, in his remarks, opined that Okowa and his deputy have done well and there was no need changing a winning team.

He said all the non-indigenes from all the nooks and crannies of the country took the decision to support Okowa’s re-election after months of painstaking deliberations, consultations and verification of the performance of the governor.

He, therefore, assured that come 2019, Governor Okowa would be returned as governor of Delta State, adding that Chief Izoukumor was a detribalised person who’s been helpful to both Deltans and non-Deltans.

Elder Owolabi enthused that the support for Okowa by non-indigenes was not borne out of pecuniary gains, but to ensure that the peace, unity and prosperity that have characterised the state for the past three years are sustained.

Leader and Seriki of the Hausa community in Warri, Alhaji Balarabe Bako, in his remarks, said his subjects would give Okowa block votes because he has been unbiased, operated an open door policy and made Delta a home for them.

The Edo nationality under the umbrella of Edo Progressives Forum, led by Elder Tony Azeta, thanked other tribes for supporting Okowa and Deltans whom they described as their younger brothers.

Azeta said since Okowa has done well, coupled with the detribalised disposition of Chief Izoukumor, they would operate with a clear conscience to return the PDP Governorship candidate and others for a second term.

Chief Anthony Nnaji Uba, who led Ndigbo residents in Warri to the inauguration, claimed there was over 2.5 million Igbo resident in Delta, assuring Senator Okowa that come 2019, his kinsmen would shun returning to their states of origin to vote en mass for Okowa and all other PDP candidates.

Rounding off the rally, Chief Izokuomor, who was elated by the assorted crowd, underscored the significance of the gathering, saying “this unity of purpose is unique and significant; it is a pointer that we, Nigerians, hold the key to Nigeria’s development and its future.”

He urged the gathering to “take the gospel of ‘OKOWA/OTUARO 2019’ home; proclaim it in the marketplaces, churches, mosques, preach it to their friends, children and everybody. Take it with you everywhere you go.”

COVID-19: Index case has been in Delta for couple of weeks ― Okowa