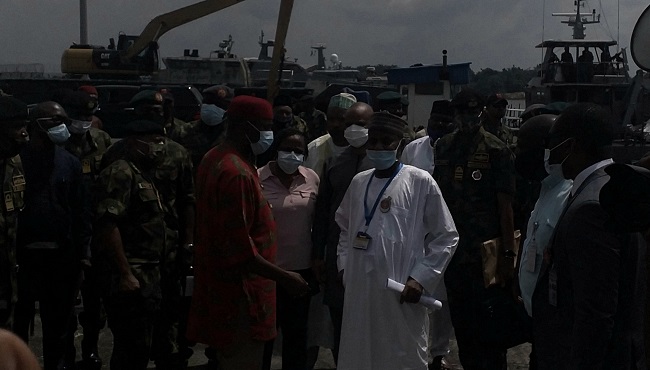 The Presidential Committee on the $195 million Deep Blue project on Friday visited Warri, Delta State to assess the level of preparedness of assets for the take-off of the project.

The committee, which arrived on a Nigerian Air Force (5N-FGU) aircraft, touched down at the idle Osubi Airstrip and headed for the Nigerian Navy Air Arm station at Effurun where some assets were inspected in closed doors.

Speaking after the Minister of Transport, Mr Amaechi had declined comments when prodded by journalists, Minister of Defence, Maj. Gen. Magashi affirmed that the visit was in continuation of the Deep Blue project of the maritime sector.

“It’s a continuation of our maritime activities. We want to see how we can deploy our assets across the coastal area.

“And so far so good, things are moving according to plans as regards the deep blue sea project.

The assessment we had today was very good and encouraging and we will be on the ground very soon,” he noted.

The million-dollar Deep Blue project conceived by NIMASA is meant to tackle insecurity in Nigeria’s territorial waters for the upsurge of economic activities.

It will be recalled that the committee was in Lagos on Thursday where the Minister of Transport, Mr Amaechi, had disclosed that 85 per cent of equipment and assets for the project take-off had been procured and that by March 2021, all equipment would have been fully acquired.

The Deep Blue project focuses on the security of the Federal Government’s maritime assets from threats of pipeline vandalism, piracy and illegal fishing with the full partnership of the Nigerian Navy, the Nigerian Air Force and other relevant security agencies.

Obaseki who joined the Peoples Democratic Party (PDP) in June after he was disqualified by the APC, defeated Pastor Osagie Ize-Iyamu of the APC in the election results announced by the Independent National Electoral Commission (INEC) on Sunday.Deep Blue project  Deep Blue project

A Kano based industrialist, Chief Kalu Ogbonnaya, has advised the Federal Government to take necessary steps to stimulate the nation’s economy to prevent a recession post COVID-19.Deep Blue project

Ogbonnaya who spoke in an interview with the News Agency of Nigeria (NAN) on Thursday in Kano, said as a result of the coronavirus raving the world, no business has been moving.Deep Blue project