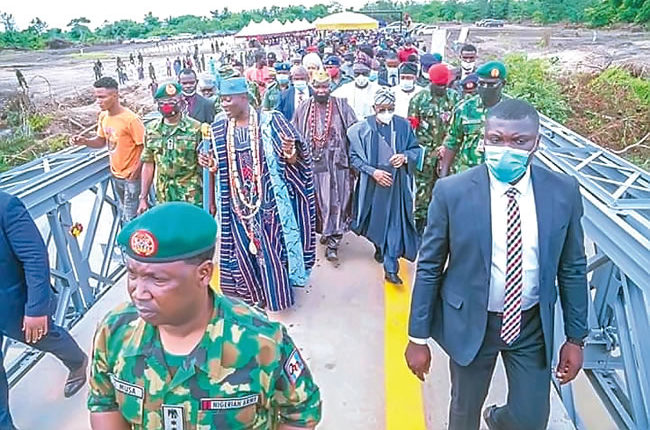 Just as the Yoruba would say: if a horse were to take a ride in the belly of Olowu of Kuta in Ayedire Local Government Area of Osun State, Oba Hammed Adekunle Oyelude, and his people on Monday September 14, 2020, it wouldn’t have missed a step.

On his ascension as king, Oba Oyelude had observed that an ancient bridge over the Osun river linking his community to lkoyi-Ede and then to Osogbo, the state capital was a major impediment to the economic prosperity of his people. Like the true scion of his warrior ancestors, he was determined to crush the mountain blocking the way to his people’s promised land. Monday `14th was the day that marked the fulfillment of his dream.

The high and mighty came to town to celebrate with the Olowu. The crowd was escastic as Kuta sons and daughters from all over the world came to join their King to host the cream of the Nigerian Military led by the Chief of Army Staff, Lt Gen Tukur Buratai, the state governor, Gboyega Oyetola and several royal colleagues of the Olowu who swarmed the ancient town to commission the reconstructed bridge and the Oba’s new palace.

The Osun State governor officially commissioned the historic bridge built by the Nigerian Army and named ‘Lieutenant General Tukur Yusuf Buratai Bailey bridge’. The commissioning of the new Palace of Olowu of Kuta was done by the Chief of Army staff.

The dilapidated colonial bridge was reconstructed by men of the Nigerian Army Engineering Construction Regiment, Ede, to the delight of the townspeople.

Governor Oyetola, in his speech, praised the Chief of Army Staff for the support the army under his leadership had been extending to the people of the state.

“General Buratai’s love, interest and support for Osun transcend today’s donation. When I contacted him for support when the exemplary security situation in the state was blighted by the raging security challenges in the nation last year, he gave maximum support to our security initiative, the gains of which we are enjoying today,” Oyetola said.

Governor Oyetola equally commended Oba Oyelude for constructing and bequeathing the ultramodern palace to the good people of the ancient town.

“I thank the Olowu of Kuta for bequeathing this palace to his people and for his tremendous roles not only in mobilising his people to support government policies and programmes but also in ensuring that peace and order reign supreme in his domain,” he stated.

In his remarks, General Buratai said the reconstruction of the bridge was in furtherance of the Nigerian Army’s corporate social responsibility to the people of the country. He said the gesture was an attestation to the fact that the army had gone beyond the provision of adequate security and protection of lives and property of the citizens to contributing significantly to the growth and development of the society.

Buratai, who commended Governor Oyetola and the Olowu of Kuta, for their support for the military, particularly the Nigerian Army, reiterated the army’s commitment to ridding Nigeria of all forms of insecurity.

In his remark, the Olowu of Kuta praised Governor Oyetola and General Buratai for being supportive of the growth and development of the people of the town.

The traditional ruler expressed delight with the successful completion of the reconstructed bridge that links three major towns together. He said: “We live in an age when men of war are burning bridges and putting up isolation walls, but today, we are celebrating the building of a bridge by a General for the good of humanity. What we are doing here today is both historic and historical. It is historical because there is a very long history of hope, abortion of hope, disappointments and disillusionment behind the bridge we are commissioning today.

“I say today is historic because fulfillment came for us just when all hopes appeared lost. Today marks a new era in the history of Owu-Kuta, Ikoyi and Ede because the bridge we are about to commission is reconnecting not just our physical communities but more importantly, the long lost chain that tied our spirits with those of our ancestors.

“My forbearers started this agitation to have a link road between Kuta and Ede so as to strengthen our people’s social ties and boost their economic activities. But for more than a hundred years, they were on it, bogged down by one failure or the other. There were moments when their hopes were raised only to be tragically dashed from unexpected quarters. Several of our illustrious sons and daughters worked very hard to birth this dream of our fathers without success.

“When I became the Olowu of Kuta some years ago, I made a covenant with God and with my ancestors to use every contact and connection I might have to advance the cause of Kuta. And that precisely I have been doing without looking back. It was the spirit behind the construction of the Olowu Kuta palace which we are also commissioning today. The same spirit spurred me to seek help from General Buratai for the construction of the Osun Bridge.

“It took us more than a hundred years to get this done. I dare say that a hundred years from now, sons and daughters of Kuta, Ikoyi and Ede and all our neighbours will remember a bridge-builder in army uniform from Buratai in far away Borno State who, out of sheer love for me, for my people and for my state, decided to use his office to get this done for Yorubaland.

“I see this bridge as my interminable pension, a benefit from which my descendants and the whole of my community will continue to draw. General Buratai, officers and men of the Nigerian army, my people have asked me to tell you that you have, from this moment, become forever a valuable part of our community of grateful people.

“For my governor, Alhaji Gboyega Oyetola, you shall forever not be put to shame. If you call for assistance once, a million times will God and the whole of humanity answer you. I can’t thank you enough for your support, even for allowing me as a first class traditional ruler to roam freely in my advocacy and loud support for our military. At no time did you say no as I travel wide in my advocacy for the country and its fighting forces.

“I thank President Muhammadu Buhari for having implicit confidence in General Buratai. It was his belief in the ability of General Buratai to act well that empowered him to do this for us. We are grateful. I will not end this address without urging all Nigerians to keep faith with our army and the Federal Republic. The Nigerian Army under Lt. General Tukur Buratai has ever been ready to protect our territorial integrity and they are lawfully submissive to democratic authority,” the Oba said.

Sadism as a governing philosophy in Buhari’s Nigeria