Features
By Yejide Gbenga-Ogundare On Nov 6, 2020 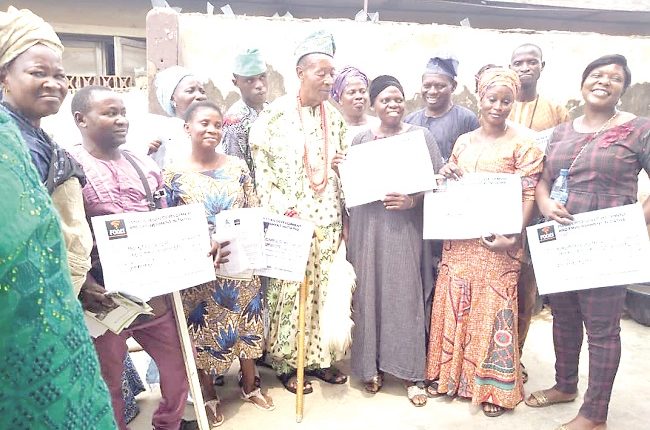 As part of efforts to encourage entrepreneurship and give back to the society, a non-governmental organisation,  the Funmi Obisesan Development and Empowerment Initiative (FODEI), has given out interest-free loans in Ona Ara Local Government Area of Oyo State as startup capital.

The loans which were given to them to start their own business by FODEI, an organization with the sole focus of helping and empowering the people of Ona-Ara Local Government in all ramifications of life, was not only interest-free but also required no collateral.

The founder of the organization, Engr Funmi Obisesan-Fajemiseye, made it known that her focus is to ensure she contributes meaningfully to the development of Ona Ara communities, adding that this is the reason every effort of the organisation had been primarily focused on indigent people in Ona Ara.

According to her, the only way life can be easier on people is by ensuring every individual shows love and concern for others, adding that, “we must ensure we be our brother’s keeper in every way. We must look out for the less privileged, share with them when we have and ensure we set them on the path of financial independence so they do not become liabilities.”

“The beneficiaries were given the money based on the amount they applied for; some indicated that they were going to use the fund to start a SME but for others, the assistance is for them to expand their SME business into a MSE and we ensured we gave them the exact amount they asked for to ensure they succeed in their vision,” Engr. Obisesan-Fajemiseye stated.

The beneficiaries expressed their satisfaction in the loan process which they said did not give them any stress; they especially expressed appreciation that they did not need to bring any collateral nor will they have to pay any interest on the loan which was spread in a manner that will be make it easier for repayment without stress.

This is not the first time FODEI will be touching the lives of people especially those  living with disabilities within Ona Ara communities; earlier in the year, the foundation had organised a vocational training programme for people living with disabilities to put them on the path of financial independence and lighten the burden of poverty within people in the community.

Also, in fulfillment of its promise to always look out for people living with disabilities within Ona Ara community, (FODEI), at the height of the coronavirus pandemic, embarked on distribution of food items to members of the Ona Ara branch of the Disabled People Association and the underprivileged in Ona Ara community.

The distribution was part of efforts of FODEI to ensure life is easier for the underprivileged people in indigent communities within Ona Ara and reduce the burden of lack experienced by many low income earners as the nation fought the spread of COVID-19.

Engr Obisesan-Fajemiseye, had stated then that the exercise was part of contributions to humanity during the challenging Covid-19 period and in fulfillment of the promise to the people of Ona Ara, especially those living with disabilities, as the organisation had earlier promised to always look out for them during an earlier visit.

Youths in the community were also not left out of the distribution in order to curb cases of restiveness and unnecessary violence, as well as to encourage them to adhere with regulations put in place to curtail the spread of the coronavirus.

Emphasising the reason for focusing all her efforts on Ona Ara communities, Obisesan-Fajemiseye stated that it is because Ona Ara is her home and charity must begin from home. She said, “My father, Oluwole, is one of the children of Late Papa Ariibi and Mama Abeje Obisesan, my late grandfather during his lifetime was one of the elders-in state at the Amuloko and Ile-Aperin with regards to critical decision makings in the interest of communities in Ona-Ara local government. The Obisesan family lineage is strongly rooted with sons and daughters of Ona-Ara, the descents of the Obisesan family are still Baales and Oba at various locations in Ona-Ara. As a daughter of the soil, I decided that my charity must begin from home; Ona-Ara local government and Ile-Aperin; believing that the things I do will benefit my root.”

Those who attended the loan presentation ceremony include the Alakanran of Akanran, Oba James Obisesan; Chief Kamorudeen Obisesan, the Bóbajiroro of Akanran land, the entire council of chiefs of Akanran land, Chairman of Association of the People Living with Disabilities, Ona-Ara branch, Chairman of the Ona-Ara vigilante, Alh Olasupo and the Zenith Labour Party chairman in Ona-Ara, Hon Okunola among others.

The Inspector-General of Police (IGP), Mohammed Adamu, has convened a meeting with stakeholders and has agreed to meet all demands raised by the #EndSARS protesters, which include halting use of force against protesters and unconditional release of arrested citizens.Day indigent people  Day indigent people

What does Nigeria need? Youth involvement in governance or change of mindset of the entire populace?

Injustice in a digital economy: How government is killing creativity,…