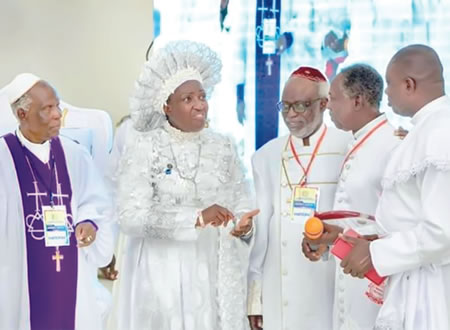 The maiden edition of the Seraphim Media Summit held last weekend at Seraph Land, Maba, Ogun State, was a leap for leaders and member of the Cherubim & Seraphim Unification Church of Nigeria, as the event exposed the church at large to the value of the media as a vital tool to project the image of the church positively, as well as a means to propagate the gospel through the emerging technology.

Other dignitaries of the church from all walks of life including the wife of the Ooni of Ife, Evangelist Naomi Ogunwusi, were also at the event.

In her address, the Founder of Love of Christ Generation, London, Reverend Mother Esther Ajayi, said that the mission of C&S was to renew the church’s image and address the wrong impression about the church.

“This summit is important because we live in a world that is changing. We are called all sorts of names by people. Even people who come to us for help tarnish our image in the daylight. But like other denominations, we all have our shortcomings and humans will always be humans,” she said.

She also stated that the founder of the church was never a cultist, adding that “the church will continue to remain the envy of others, as it is the only indigenous church that doesn’t have any western influence. Our late founder was not a cultist but he was feared by cultists. When I met with Pastor Enoch Adeboye recently, he said his late mother was always saying that fetish people feared C&S because they knew they were powerful.”

She urged the media to be free and fair when reporting C&S, just as she cautioned actors and actresses to stop projecting the white-garment church in a bad light and that members must also avoid dragging the name of the church into disrepute.

The Supreme Head, Cherubim & Seraphim Unification Church of Nigeria, Prophet Solomon Alao, commended the organisers of the summit, just as he described the progammes as an eye-opener to the lapses in the church and the need to make use of the media to project the image of the church within Nigeria and beyond.

He said: “With all the church has done to provide spiritual and physical supports for humanity, it is unbelievable that many take joy in tagging the church in ungodly manner, which negates the essence of the church. We are pleading with them to fear God. I admit that we have a few bad eggs among us, but this is not peculiar to our church alone.”

In her remarks, Ogunwusi revealed her love for the church, adding that “despite the fact that I was born and raised in a Bible-believing church, whenever I preached as a young girl, they said I sounded like a member of the C&S. It was strange to the church I worshipped. They said I preached like the people from C&S. I thank you for bringing me here today because I have always wanted to be identified with the people they say I preach like. I love the church so much and I will always speak for you anywhere.”

She, however, advised members to shun unnecessary criticisms, saying that it was a deliberate act by certain people to ridicule all the church stood for.

“I rejoice with the church today because of the foundation. When I wanted to learn about indigenous men of God, the first person that came to my mind was the late founder of the church, Moses Orimolade. I want you to know that you are a beautiful brand regardless of what people say about you. You have a beautiful mark of identification. With your white garment, you don’t need any further introduction to anyone,” she added.

In his speech, Momodu, charged the church to sustain a cordial relationship with the media in all areas as it will give the church an edge. He also advised the church to embrace the social media in propagation of gospel.

‘Only preaching of the gospel will curb insecurity in Nigeria’